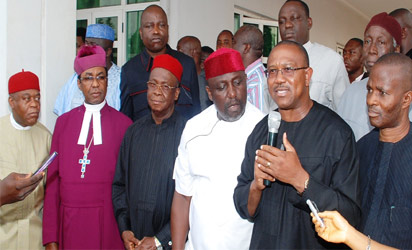 Leaders from different fields of human endeavours in the southeast geo political zone of the country have stressed the need for cooperation on areas that will engender integration of the region for greater prosperity.

They regretted that the South East has lost its past leadership role in setting the pace for the economic integration of the states of the federation and called for the immediate return to the past glory.

The leaders, made the resolution Thursday during the second Nigeria Union of Journalists (NUJ) South East Media Summit held in Enugu.

The summit which examined the role of media in South East Integration drew participants from the region and beyond including the former minister for Power Prof. Barth Nnaji as keynote speaker.

Participants at the summit agreed that integration in the South East Region was timely and desirable.

In a Communiqué issued at the end  of the summit the Participants, agreed  that the region is endowed with abundant human and material resources and therefore urged the media to promote co-operation and synergies needed to engender growth and development in the zone.

They bemoaned the collapse of the culture of the people of the region and crisis in their value system and urged for the situation to be redressed.

The summit urged the South East governments to arrest the current state of insecurity in the region and urgently devise new strategies for security management as a pre-requisite to sustainable integration in the zone.

Participants also considered integration as part of the media Corporate Social Responsibility and urged the raising of standards of journalism practice to achieve the desired goals.

It was canvassed that development of courses and institutions critical to effective South East development and integration should be taken seriously.

The Summit urged support from the private sector, corporate originations  and governments of the region to always consider the media as ally in the formation and execution of policies tailored towards the region’s integration.

It was also observed that major challenges of media practice in the zone include poor and irregular remuneration and urged for a paradigm shift from the traditional media role to the re-shaping the history of the region.

The Participants called for more media ownership by southeast people and publishing of Igbo versions of newspapers owned by the people of the region.