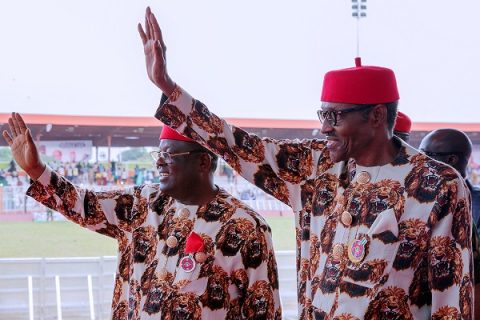 Nigeria’s President, Mohammadu Buhari, has reassured the people of South- East geopolitical zone of the country of his administration’s commitment in addressing  the issue of deplorable roads in the region, saying the problem will be tackled via the 2018 budget.

He stated this Wednesday in Abakaliki, the Ebonyi state capital while addressing the people and  stakeholders of the state at the exco-chambers of the government House during his one day working visit to the state.

The president who is visiting the zone for the first time since he assumed office as Nigeria’s leader in 2015,  declared that the diversity of Nigeria  makes it unique among the committee of nations.

Buhari, who arrived the Akanu Ibiam International  Airport  Enugu, at about 10: 30 am in a president jet,  before proceeding to Ebonyi state, equally insisted that he will continue to promote the unity of Nigeria even on the faces of many odds.

His words: “My presence here today is a demonstration of my strong belief in the unity of Nigeria. As the most populous country in Africa with over 300 ethnic groups, our diversity is almost unique among other nations,” .

The president who was received at the Airport by governors of South East as  well as Ministers and political appointees from the region, had assured the people of the zone of his administration’s commitment to carry out projects that will fast-track development in area.

“When I met with leaders of the South East last month in Abuja, they raised several issues of concern including the state of roads in the region. I want to assure you that we will deliver on our promise.

“Our 2018 budget include many strategic projects for the region in roads, power, agriculture and social sector,” the President said.

The president  was later decorated with the highest chieftaincy title of (Enyi-Oma 1) meaning  good friend. of Ebonyi state from traditional rulers of the state.

Governor, Umahi, had earlier in his speech, expressed appreciation to  the President for his  support to the state especially in the Agricultural sector.

He used the visit to appealed to the President for refund of money expended by the state government on some Federal Roads in the state.

A former governor of the state and serving Senator, Dr. Sam Egwu who addressed the Nigerian leader  on behalf of the stakeholders in the state, applauded  the President for the recent decision to pay former Biafra Police officers pensions.

According to him, “Such an act of accommodation is what translates a mere leader to a great father of the Nation”.urging the president to continue to support the state, particularly in the area of Agriculture.

The event was attended by political leaders, religious and traditional rulers, among others.