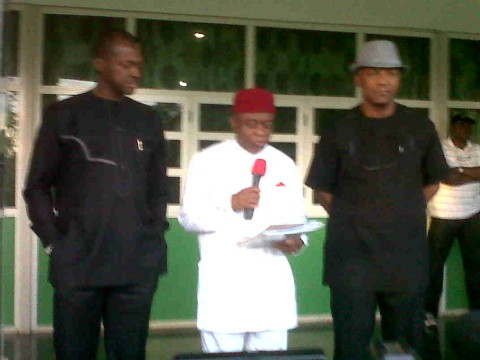 The South- east governor’s forum on Sunday expressed satisfaction with the commitment and efforts of the federal and state governments in tackling the dreaded Ebola scourge in Nigeria.

Rising from its one day meeting held in Enugu, the forum said, “we commend the federal and state governments for their efforts to arrest the Ebola scourge”

The forum in a 4-point communique read to newsmen by its chairman, and governor of Abia state, Chief Theodore Orji, also urged the federal government to establish a cargo section at the Akanu Ibiam international Airport, Enugu.

Orji disclosed that plans have been concluded by the governors to summon a meeting of the Elders forum of the zone in three weeks time, where issues concerning to the south east region will be deliberated upon.

The meeting which was attended by Governor Martin Elechi of Ebonyi, Sullivan Chime of Enugu, and deputy governor Anambra, Dr. Nkem Okeke, equally expressed happiness with the way former minister of information, professor Dora Akunyili was given a befitting burial.