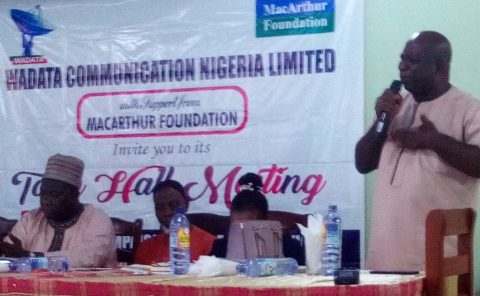 (AFRICAN EXAMINER) – Stakeholders at a one day town hall meeting on anti-corruption and promotion of good governance in Nigeria, have stressed the need for all and sundry to join hands with the federal government in the ongoing war against corruption in the country.

They posited that the fight against the cancer worm which has eaten so deep into all facets of the nation’s economy should not be left only for the anti-graft agencies, such as the Economic and financial crimes Commission EFCC and Independent Corrupt practices and other Related offences commission ICPC.

The stakeholders who spoke during the town hall meeting organized by Wadata Communications Nigeria limited in Enugu Thursday, maintained that for the central government to truly win the war against the menace which has placed Nigeria and its people on a global map of corruption perception index that adversely affect their lives and development, the citizens and leaders at all levels must be on one page .

Speaking at the event, South – East zonal Head of ICPC, Mr. Amedu Sule, harped on  the need for organizations supporting government in the war such as Wadata Communication, to take the anti-corruption massage to the grassroot level, adding that such information should be translated into local languages for easy understanding by people of various localities.

According to him, there is no gainsaying the fact, that corruption has done serious harm to Nigeria nation, hence the need for citizens to support the fight, “it, should not be left for the federal government alone, it should be a collective fight.

In his speech, project Manager, Wadata Communication, Zubair  Abdurra’Uf Idris, disclosed  that the town hall meeting is being organized in the six geo political zones of the nation, with the support of Mac Arthur foundation.

“Our commitment to the promotion of good governance and accountability in this project is a concept of Wadata communication Nigeria Limited, owners of prestige Radio  Minna, Niger state, and supported by the John D and Catherine T.

“MacArthur foundation is aimed at stepping into difficult terrain of the fight against corruption through investigative journalism and reportage on radio productions in twelve radio stations across the geo political zones in Nigeria.

Idris added that: “There is no doubt that our communities have a greater role to play in the fight against corruption apart from the one agencies of state, like EFCC, ICPC, Code of Conduct Bureau and other agencies undertaken.

“We therefore, urge community leaders and Non-governmental organizations (NGOs), to cooperated with Journalist in the production of investigative reports on the fight against corruption.