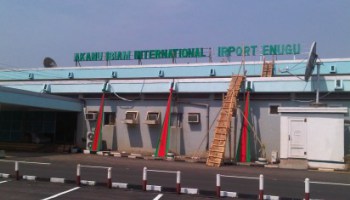 (AFRICAN EXAMINER) – Stakeholders made up of Airline operators, Captains of Industry, investors, security agencies, among others, in the South- East geopolitical zone of Nigeria, have expressed worry over lack of basic and standard facilities at the Akanu Ibiam international airport, Enugu, saying the development, has  continued to affect the economy of the region.

They said the situation has over the years remained a serious obstacle to business growth in the zone, as it has forced scores of investors to relocate to other areas where its international airports are functioning optimally.

The stakeholders however, appealed to the federal government and other relevant agencies in the aviation industry to look into the issue, especially the runway which they insists do not have the capacity to  attract international airlines.

According to them, the situation, has  also been responsible for the poor patronage of the said  airport by entrepreneurs from the Eastern part of the Nigeria, pleaded with the Federal government to come to the rescue of the airport.

They raised the concern Tuesday, in Enugu during a joint meeting with the Customs Area Controller in charge of Enugu/Anambra and Ebonyi command, Suleiman Mohammed,

African Examiner Correspondent who covered the meeting reports that it took place at  the Enugu Command  headquarters .

In his speech, Mohammed, corroborated the complaints of the stakeholders, stressing  that the attention of the Federal government is urgently needed to redress the shortfalls at Akanu Ibiam international airport,so as to enable it operate fully as an international airport like others in different parts of Nigeria.

He listed some of the key problems at the airport to include, lack of water, non development of the cargo section into full capacity, poor state of the runway amongst others.

The Custom  senior officer, hinted that except for the ‘Ethiopian Airlines, other international airlines such as Air France, KLM,have bluntly  refused the plea to extend their flight schedules to Akanu Ibiam International airport because they cannot afford to risk their multi billion investment where facilities are lacking.

Mohammed stressed that a – 24 hour  functional sources of  water are needed at every airport to assist fire fighters at any moment there is emergency like fire outbreak at the airport, but regretting that  the Akanu Ibiam international airport lack water.

He disclosed that the Chief Executive of Triax Airlines,Prince Engr. Arthur Eze,has tabled the problems of Akanu Ibiam International airport to the Minister of Aviation,saying while they are expecting positive response, he deemed it fit to call for a stakeholders meeting,to discuss a way forward.

The Controller, noted that if the airport is fully operational, it would gingered economic growth in the South East zone of the country,and would enable  his operational zone to meet up with their 2017 Revenue target of over ten billion naira.

“But as of now, the reverse is the case, as the command has only been able to achieve below five billion naira,barely four months to the end of the year.

The Chief Executive Officer of Triax Airlines,who was represented by an Enugu based transport magnate chief Emeka Okeke, commended the initiators  of the meeting, expressing the hope that the assurances from the Minister of Aviation, to give Akanu Ibiam International airport,the desired attention it deserves would come to reality.

Most of the stakeholders who spoke during the interface, had complained that many travelers from the South East zone, have also been compelled to stop usage of Akanu Ibiam International flights, because of the fact that the ‘Ethiopian airline,which is the only international airline operating from the airport due to the monopoly it enjoys, has drastically increased the cost of  it’s flight ticket from Enugu with over Fifty thousand naira,even when Enugu to Addis Ababa is a shorter route than Lagos.