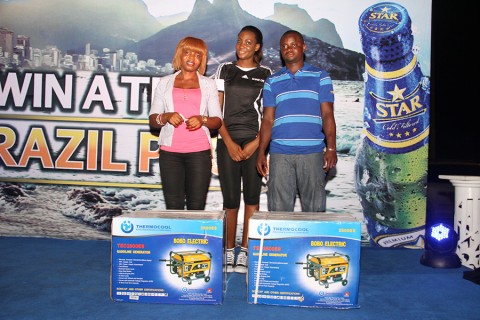 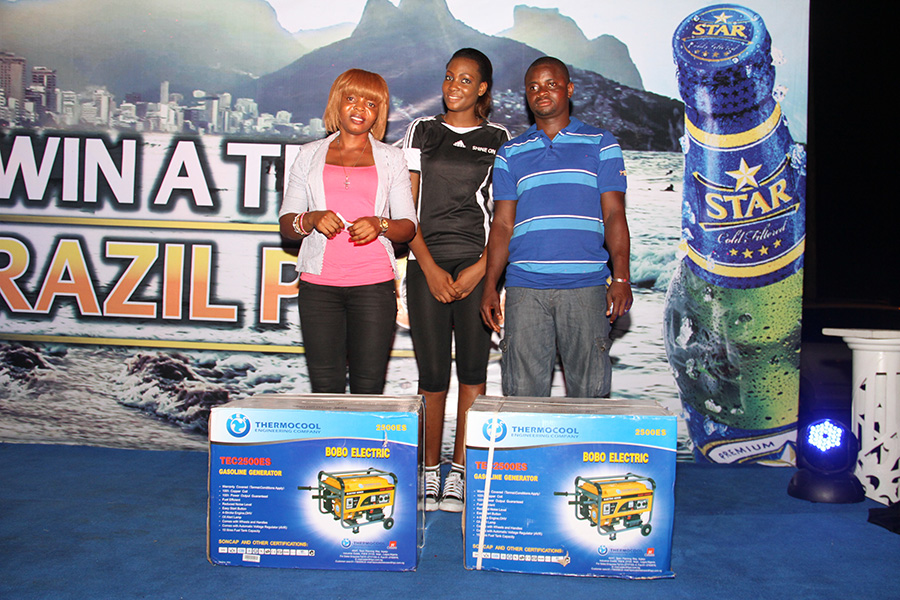 Winners of generating set at the Star Trip To Brazil promo, held at the Cyclic Centre, Costain Roundabout, Lagos 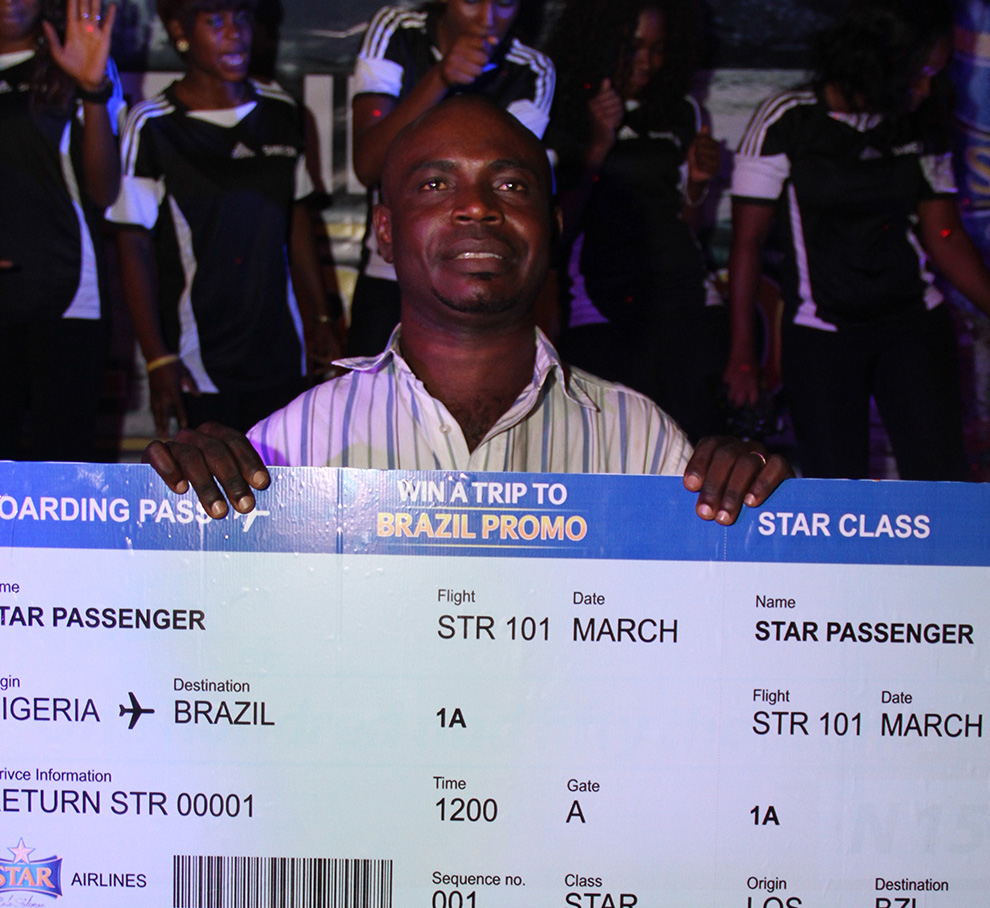 Timothy Victor, winner of the grand prize of Ticket to Brazil, set at the Star Trip To Brazil promo, held at the Cyclic Centre, Costain Roundabout, Lagos 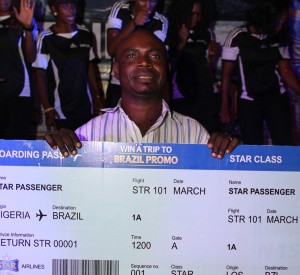 Timothy Victor, winner of the grand prize of Ticket to Brazil, set at the Star Trip To Brazil promo, held at the Cyclic Centre, Costain Roundabout, Lagos

The Star Trip To Brazil consumer promotion is a unique brand activation from Star lager beer, Nigeria’s highest selling beer brand, from the stable of Nigerian Breweries Plc. A total of 11 lucky consumers will emerge winners from the on-premise raffle draws, which will be held in selected bars across key regions/districts of Nigeria.

Victor, won for himself the prize of an all-expense paid trip to Brazil, which will see him touring the South American country, courtesy of Star lager beer.

The winner, who could not hide his joy when his ticket was picked, emerged from the raffle draw held on Saturday, March 1, 2014, at the Cyclic Centre, Costain, Lagos.

He said, “I am very happy because I wasn’t expecting to win. I came from Egbeda to Costain, just because of this promo.”

He narrated that he had to endure a six-hour wait after arriving at the venue at about 4:00pm, while his ticket was picked as the grand prize winner by 10pm.

The married father of three children, at a point, said he got fed up and wanted to leave, but his very good friend, Lucky Ndumele, convinced him to wait till the end of the promo.

In Lucky’s word, “We met around 4:00pm, but he wanted to leave at a point. I told him to wait, and that it’s not over until it’s over. After seeing a man sitting on a table before ours win a generator, I believed we could still win prizes.”

Two other people are however on stand-by, in the event that Mr. Victor, for any reason, is unable to travel. They are Tajudeen Babatunde Bello, the first runner-up; and Mohammed Lawrence, the second runner-up; who also won a generating set and a 32 inch TV set respectively. Mr. Bello, a 52 year old engineer, speaking on how he emerged winner, said: “I was at the bar drinking Star when a promoter approached me and gave me a token in exchange for the crown corks of the Star beer I was drinking. They also informed me about the day’s raffle draw.”

Alhaji Abdullahi Abiodun Ayinla, another lucky consumer, won a 2.5 KVA power generator. He confessed that Star was not his regular beer, but consumed the alcoholic beverage when he learnt of the promo. Alhaji Ayinla was particularly grateful that his dream of winning a generating set on the day of the draw came to fruition.

In addition, two other consumers, Chidi James and Amarachi Joy Eze, both won 32 inch TV sets. While Chidi said he had won several items from Star in the past, Amarachi bought Star beer after learning of the promo. “When I came in here today and heard about the promo, I told myself I must not go home empty handed. I gave myself that target and I’m very happy. Though I have a TV set, it’s not like this one. I’ll use this one and keep the other one. My parents will be so happy when I get home with the TV set,” she enthused.

Mr. Omotunde Adenusi, Brand Manager – Star, Nigerian Breweries Plc., said that the Star Trip To Brazil promo was the brand’s way of appreciating consumers for their patronage. Omotunde remarked: “As Nigeria’s highest selling beer brand, we continually seek means of rewarding our consumers. Taking them on an all-expense paid trip to Brazil is a memorable experience which I’m sure they’ll cherish for years to come.”

Asides the raffle draw, consumers were entertained by a dance group, budding talents and a comic performance by Bash, the evening’s compere.

Other prizes won were jerseys, home theatre sets and industrial fans. To qualify, consumers have to drink Star and exchange the crown corks for raffle tickets, which will then be entered for the on-premise raffle draws, holding at selected locations.