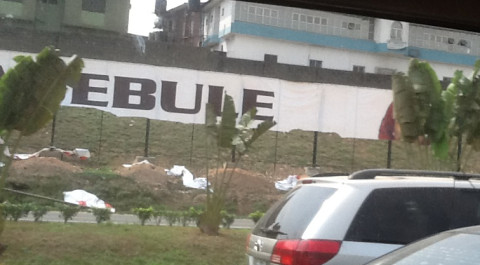 Support Group for Ambode 2015 condemns the destruction of billboards of the All Progressives Congress candidate Mr. Akinwunmi Ambode by gangsters masquerading as Federal Task Force in recent times. 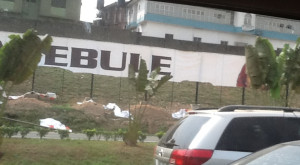 For instance, two weeks ago, an illegal body unknown to outdoor regulation in Nigeria, Federal Task Force pasted notices on outdoor advertisement on the Third Mainland and other roads built by the Federal Government in lagos State purporting to direct their owners to remove them.

It followed up this illegal threat at the weekend by destroying the billboards and other outdoor adverts, including those displaying the messages and pictures of APC Gubernatorial candidate Akinwunmi Ambode.

The Fourth Schedule of the 1999 Constitution makes advertising the exclusive preserve of local governments and therefore removes any legal and legitimate basis for the action taken by the so-called task force.

For the avoidance of doubt, the section 1 (k) (I)states inter Alia:

“The main functions of a local government council are as follows: control and regulation of outdoor advertising and hoarding.”

The fact that the Federal Government used the resources of the Nigerian people to build a road does not provide any basis for violating the spirit and letters of the Constitution as the construction of any road does not confer power to authorize hoarding or outdoor advertisement on such a road on whatever tier of the federation that built the road.

The only tier permitted by law to cede such power as the case may be is the local government authority.

It is becoming clear that the PDP has adopted terror as a strategy of intimidating voters in Lagos State in the hope that they can harass and coerce the peace loving citizens of the state to surrender their right to elect the governor of their choice.

The desperate politicians whose shenanigans in The electoral robbery that took place in Ekiti State have just been exposed should note that these dangerous and inhuman strategies will surely fail.

The Federal Task Force, a gross exploitation of the unemployed by an insensitive and anti-people PDP-led Federal Government seeks to set the poor against each other. It is sad that the same government that controls power at the centre is approaching the electoral contest in Lagos State with reckless impunity and irresponsibility.

We hereby call on the PDP and its candidate, Mr. Jimi Agbaje to call on the Federal Task Force to abide by the rule of law by respecting the authority of the local governments of Lagos State and their agency, the Lagos State Signage and Advertising Agency to carry out the regulation and control of outdoor advertisements and hoarding.

This is the only way Mr. Agbaje can convince the electorate that he truly subscribes to decency, respect for authority and non-violence in canvassing his options in the on-going elections.