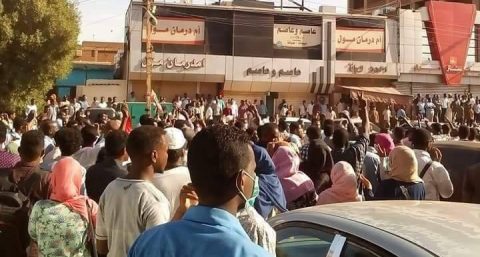 (AFRICAN EXAMINER) –  The death toll from protests over price hikes in Sudan has risen to nine, an opposition party spokesman said on Friday, amid a state of emergency in two regions.

Eastern al-Gadarif state and northern Atbara state are both under emergency rule since protests over rising bread and fuel prices broke out on Wednesday.

He alleged that some died after being arrested and others were shot at the protests.

On Thursday, Mubarak al-Nur, a member of parliament, said two students had been killed.

Sudanese Minister for Information, Osman Bilal acknowledged that the police had used teargas to break up the protests, but while he had heard reports of deaths, he could not give a toll.

“The protests went violence and protesters are destroying civilians properties,” Bilal said, in defence of the government crackdown, adding, however, that they were investigating reports of deaths.

There were protests in January over the same issue, with police using teargas to disperse hundreds of protesters in the capital Khartoum, and similar protests were held in Sudan in late 2016 after the government
cut fuel subsidies.

The oil-rich country’s economy was negatively affected when it was split to form South Sudan in 2011.