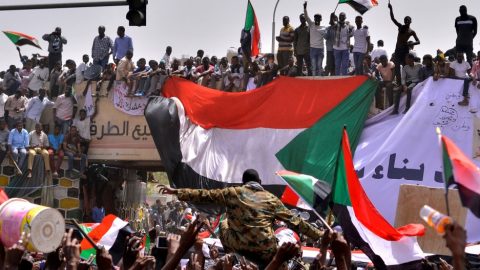 (AFRICAN EXAMINER) – Sudanese protesters demanding that the military hand over power held a sit-in at army headquarters in Khartoum for an 11th day on Tuesday.

The AU also warned that Sudan had 15 days to install a civilian government or risk expulsion from the bloc.

Sudan’s longtime President Omar al-Bashir was deposed and arrested on Thursday after months of anti-government protests.

In Khartoum, thousands of protesters remained outside army headquarters, chanting, “No going back until our demands are met!” and “We want a civilian government!”

The interim military council’s members have stressed that they are trying to deliver on the people’s demands.

One demand was fulfilled on Tuesday, when SUNA news agency reported that the head of state media was sacked.

Protesters have also stipulated that the attorney general be fired.

Al-Sheikh vowed the protesters would not be dispersed from outside army headquarters and appeared to change the council’s position on al-Bashir’s extradition to The Hague.

“The decision whether to extradite al-Bashir to the (International Criminal Court) will be made by a popularly elected government and not the transitional military council,” he said at a news conference in Addis Ababa.

The council had previously said al-Bashir – who was arrested after Thursday’s military coup – would not be extradited to the International Criminal Court to face charges of war crimes and genocide in Dafur.

While Western nations have urged the military council to hand over power as soon as possible to a civilian government, Ethiopia’s Abiy has recognised the new Sudanese authorities. On Tuesday, Russia did so as well.

“Yes, of course,” Deputy Foreign Minister, Mikhail Bogdanov said when asked by a reporter if Russia supported the Sudanese authorities, according to state news agency TASS.