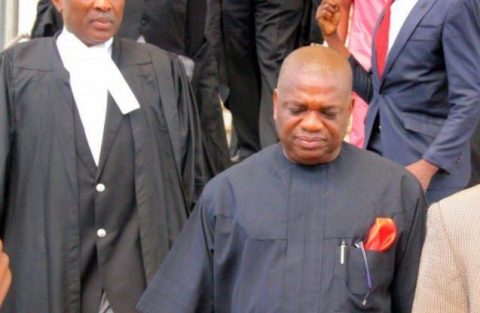 The party added that Senator Kalu deserves apology from the Economic and Financial Crimes Commission (EFCC.)

A statement signed by the state Chairman of the party, Dr. Ben Nwoye, made available to African Examiner in Enugu weekend, said the action of the apex court has “deepened” the Nigerian judicial system.

Senator Kalu, it would be recalled, was sentenced to 12 years imprisonment over N7.16 billion fraud by a federal high court sitting in Lagos on December 5th, 2019 by Justice Mohammed Idris on a 39-court charge.

According to the party, the former Abia State governor “deserves an apology from EFCC not a re-prosecution,” continuing, Nwoye called on the “Senate and House Committee on Judiciary to investigate the facts and circumstances that led to the malicious prosecution and unlawful incarceration of Distinguished Senator Orji Uzo Kalu.

The statement added thus: “We the good people of Enugu State APC celebrate with our Leader, an Igbo icon, His Excellency, Distinguished Senator Orji Uzor Kalu on his victory and the nullification of his conviction by the Supreme Court.

“Today, more than ever before, our trust in the Nigerian judicial system has deepened. It took the court to right the wrong of another courts. This victory stands as a testimony that the court is indeed the last hope for both a common man and uncommon man.

“Injustice to a common man is equally as painful as injustice to an uncommon man. We are happy to know that your determination has pulled you through. We are comforted by your exemplary determination to change the criminal justice system to ensure that no innocent person shall suffer unlawful incarceration in our nation.

“God has used five months of your productive and youthful life to expose over half a century decay in our criminal justice system. We thank God and we thank the learned jurists for giving you back your freedom.

“We respectfully demand that the EFCC should render an apology to you for wrongful prosecution. It is a time for deep reflection on the part of EFCC and not a time to make puffy statement regarding further prosecution. One wrong prosecution has already resulted in five months of unlawful incarceration.

“H.E Senator Kalu, deserves an apology from EFCC not a re-prosecution. We respectfully, request that EFCC should channel its resources to the prosecution of backlogs of other cases instead of engaging in vindictive repeat prosecution of an Igbo Icon.

“We are calling on the Senate and House Committee on Judiciary to investigate the facts and circumstances that led to the malicious prosecution and unlawful incarceration of Distinguished Senator Orji Uzo Kalu.

It said “The good people of Enugu State and indeed the entire Nigerian people would like to know how an Appeal Court Justice stepped down from his upper chambers and sneaked into a lower court room and handed out an unlawful criminal conviction against a serving Distinguished Senator of Federal Republic of Nigeria.

“The key question that begs for answer is, “was it a mistake or was it a political witchhunt?”. We fear that it is the later.

“Once again, I and on behalf of the good people of Enugu State APC welcome back our hero. Congratulation Distinguished Senator Orji Kalu. You are the Mandele of our time. Nigerian people look forward to enjoying the quality representation you brought in the red chamber.”