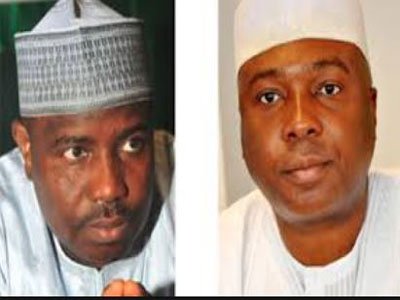 Badaru, who is the Chairman, 2018 Congresses and Convention Committee of All Progressives Congress (APC) described the story as untrue adding that APC leaders have not heard anything about the planned defection.

The governor stated this Monday in Abuja while fielding questions from state house correspondents.

“It is not true that Tambuwal and Saraki are negotiating with the PDP, we have not heard of that. Some few weeks back there was rumour about the governor of Benue and he made it clear at our last NEC that he is not moving anywhere.

“Those are rumours flying around but they don’t have consequence.

“We are united.  Governor Tambuwal is with us and the Distinguish Senator Bukola Saraki, the Senate President is also with APC and we have not had any reason to think that they are negotiating elsewhere, no.’’

In the media reports making the round, the PDP is said to have also initiated talks with three APC governors in the northwest, which is the political base of President Muhammadu Buhari.

The party is said to have called on Senate President Bukola Saraki and Sokoto state governor Aminu Tambuwal, his predecessor, Senator Aliyu Wammako, former Governor Rabiu Kwankwaso (Kano) and former Governor Danjuma Goje (Gombe) to return to its fold in order to wrest power from the All Progressives Congress (APC) next year.