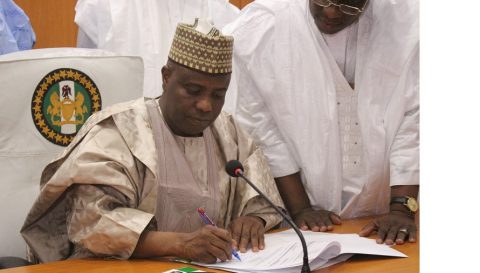 (AFRICAN EXAMINER) – Governor Aminu Waziri Tambuwal Wednesday signed into law, the Sokoto 2018 budget which was recently passed by the State House of Assembly.

Speaking at the signing ceremony held at the Government House in Sokoto, Tambuwal said the of N220.5 billion document will be implemented optimally for the benefit of the citizenry.

He despite despite challenges in meeting revenue targets in the past years, the government is hopeful of performing to expectation in the implementation of the 2018 fiscal document.

“We are aware that the legislature has not tinkered with the overall budget size even though they have reallocated some resources to different sub heads, we are happy with that.

“We believe it is within the purview of your rights as legislators to do what you have done and we will implement the as passed,” the Governor added.

While commending the lawmakers for a thorough job on the budget document, Tabuwal msaid it is gratifying to note that the relationship between the executive and the legislature in Sokoto has continued to blossom.

“This has helped in strengthening democracy in the state. The people should know that our relationship is not a master-servant relationship, but one based on mutual trust and respect for the two arms of government,” he stated.

In his remarks, the Speaker of the state House of Assembly, Hon Salihu Maidaji, said the legislature is satisfied with the performance of the state budget in 2017.

He urged the state government to strenghten the internal revenue board by providing logistics for enhanced performance.

He said the the Assembly will work with the executive to repeal obsolete revenue laws hampering drive at effective revenue mobilisation in the state.

Highlights of the budget include the setting aside of 69.9 percent, or N152.8, for capital expenditure while the sum of N67.6 billion, representing over 30 percent, was set aside for recurrent expenditure.

Similarly, the sum N14.255 billion allocated to Works and Transport while Lands, Housing and Survey got the sum of N11.560 billion.