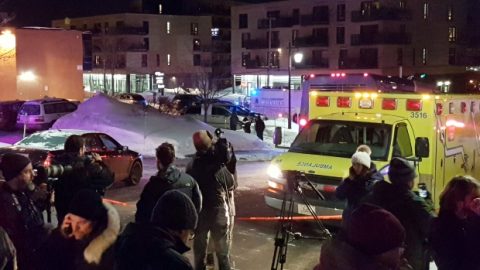 BALTIMORE, MD (AFRICAN EXAMINER) – No fewer than six people have been killed and another eight wounded, Sunday night, during a suspected terrorist shooting at a mosque in Quebec City, Canada, according to police.

The Quebec Islamic Cultural Centre (mosque) had over 50 people who had gathered for evening prayers.

A suspect was arrested at the scene and another very close to the centre. Police confirmed that there were no other suspects of the deadly attack.

The shooting was considered by the Canadian authorities as an act of terrorism. Prime Minister Justin Trudeau in a statement said: “We condemn this terrorist attack on Muslims in a centre of worship and refuge,”

“Muslim-Canadians are an important part of our national fabric, and these senseless acts have no place in our communities, cities and country” PM stressed.

The dead BBC reported that the dead aged between about 35 and 70 years, according to the police spokeswoman Christine Coulombe. She said those injured were in a critical condition.

Meanwhile, the Police has confirmed that the area has been secured and the situation has been brought “under control”. Police also confirmed that 39 people worshipers have left the mosque safely.