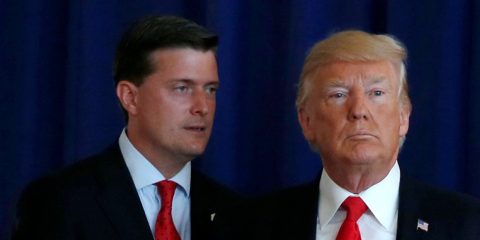 One of President Donald Trump’s closest aides said on Wednesday he would resign after news reports that he emotionally and physically abused his ex-wives.

White House Staff Secretary Rob Porter announced he’d step down a day after The Daily Mail, a British tabloid with a U.S. website, published interviews with two of his ex-wives. He denied his ex-wives’ claims that he abused them in a statement on his departure.

“I have always put duty to country first and treated others with respect,” Porter said in the statement. “I am deeply grateful for the opportunity to have served in the Trump administration and will seek to ensure a smooth transition when I leave the White House.”

Porter’s title understates his importance to the president. He served as a clearinghouse for paperwork destined for or coming from Trump’s desk, as well as an important influence on policy in his own right. Few aides enjoy greater access to the Oval Office, or spend more time in the president’s company.

Porter’s second wife, Jennifer Willoughby, told the Daily Mail that Porter had difficulty controlling his anger and at one point pulled her out of the shower and yelled at her. She took out a restraining order against him after he allegedly violated a separation agreement and punched through glass in the door of their home, cutting himself.

The Daily Mail published a copy of the order.

His first wife, Colbie Holderness, told the publication that Porter was “verbally, emotionally and physically abusive” to her. The Intercept published an interview Wednesday with Holderness in which she alleged that Porter had punched her while on vacation, and she provided the publication a photo of herself with a black eye.

Porter called the allegations “outrageous” and “simply false.” He said that he had taken the pictures that Holderness provided to The Intercept and that “the reality behind them is nowhere close to what is being described.”

“I have been transparent and truthful about these vile claims, but I will not further engage publicly with a coordinated smear campaign,” he said.

“Rob Porter is a man of true integrity and honor and I can’t say enough good things about him,” Kelly said. “He is a friend, a confidante and a trusted professional. I am proud to serve alongside him.”

White House Press Secretary Sarah Sanders told reporters that Porter “has been effective” in his job and that the president had confidence in him. He won’t immediately leave the White House, she said, calling his departure Porter’s “personal decision.”

Sanders wouldn’t say whether Porter had a full security clearance. Allegations of domestic abuse such as those against Porter could be grounds for such clearances to be delayed or denied. The Intercept said both of his ex-wives had been interviewed by the FBI as part of a background investigation when Porter was hired at the White House.

“Consistent with the practice of past administrations, issues related to an individual’s suitability are reviewed through a thorough and lengthy background check process,” she said in a statement. “Background checks involve a complex investigation run by intelligence and law enforcement agencies. As has always been our policy, we do not comment on security clearances.”/Bloomberg