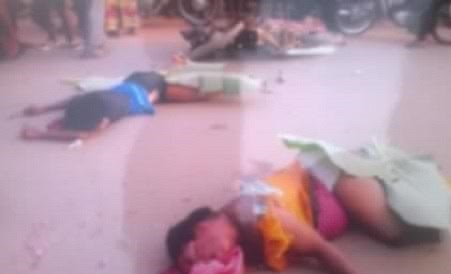 Tragedy struck Thursday at Umuaka community, in Njamba local government area of Imo state as a middle age woman and her daughter were crushed to death by a truck. 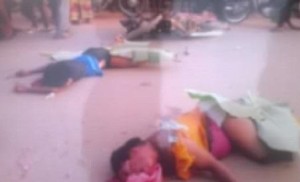 The scene of the sad incident

The woman identified as Mrs. Joy Ihebie and daughter, Miss Anulika Ihebie from Umuduru Ekwe in Isu LGA of the state, were crushed by a truck conveying gravels to construction site along Orlu-Owerri road, Umuaka in Imo state.

An eye witness told African Examiner that the late woman and her daughter were returning from the bank where they went to withdraw money meant for the payment of workers at the building site of her overseas-based son, who is a twin brother of the late Anulika?

Our correspondent also gathered that the deceased were riding on a motorcycle when a reckless motorcyclist attempted to overtake them but suddenly collided into  their own motorcycle leading to the smashing of the mother and daughter by an on- coming truck.

The truck with registration number, AA 128 MBL (Abia State) was said to be conveying gravels from Okigwe to Njama before the ugly incident happened.

It was further gathered that the late Anurika’s death came less than one week before her traditional marriage ceremony which had been fixed for Christmas day, 25th December, 2013. May their soul rest in peace, amen