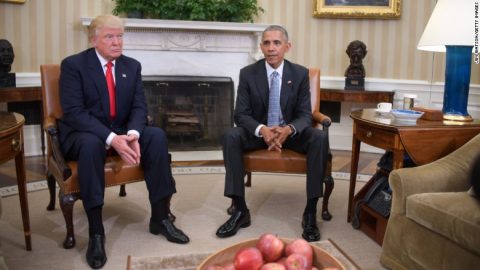 BALTIMORE, MD (AFRICAN EXAMINER) – Outgoing US President Mr. Barack Obama is playing host to his successor Mr. Donald Trump at the White House to discuss transition, being considered to be ‘’awkward’’.

White House Spokesman Josh Earnest said Mr. Obama is sincere about ensuring a smooth handover when he meets with Mr. Trump, adding “I’m not saying it’s going to be an easy meeting.”

Mr. Trump flew from New York on his private jet and landed at Reagan National Airport, just outside the nation’s capital.

The President-elect broke from protocol and barred journalists from travelling with him to cover his first meeting with Mr. Obama.

Obama and Trump are expected to appear together for the cameras in the Oval Office after a -closed-doors meeting.

Mr. Trump was accompanied by his wife, Melania, who is also expected to meet with her outgoing counterpart, Michelle.

It would be recalled the President-elect during the campaign, questioned Mr. Obama’s US citizenship and vowed to stop the legacy.

Mr. Obama in turn has declared that his successor was “uniquely unqualified”.

Still, Obama and defeated Democratic candidate, Mrs. Hilary Clinton have changed their positions, and have since been calling on Americans to support the incoming President.

Despite their calls, protesters gathered across the country Wednesday and staged anti-Trump rallies.