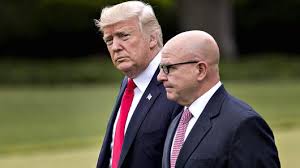 In a hint tweet, Mr. Trump thanked Gen. McMaster, hailing him that he had done an “outstanding job & will always remain my friend”.

Mr. Bolton, who has backed attacking North Korea and Iran, told media his job would be to ensure Mr. Trump has “the full range of options”.

After firing last week, his Secretary of State Mr. Rex Tillerson, Gen McMaster is the latest high-profile Trump’s appointees’ departure from the White House. Tillerson’s sack and replacement with the former CIA Director Mike Pompeo were via tweets.

Mr. Bolton’s appointment does not require US Senate confirmation. He is expected to resume Monday, April 9, 2018.

The National Security Adviser is the key counsellor to the President on National security and foreign policy issues. The appointee acts as a conduit for policy proposals coming from various government departments, including defence and state.