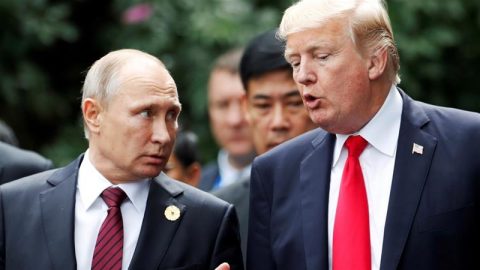 (AFRICAN EXAMINER) – US President Mr. Donald Trump has admitted getting on with Russia is “a good thing, not a bad thing”.

Trump made this assertion at the start of his first summit with the Russian President Vladimir Putin.

President Trump affirmed he hoped for an “extraordinary relationship” as he met in Helsinki, Finland with his Russian counterpart.

The US-Russia relations have since been strained by Moscow’s annexation of Crimea in 2014 and by claims that the Kremlin helped Mr. Trump win the 2016 election.

Meanwhile, some US politicians have called for cancellation of the summit, after 12 Russian military intelligence agents were charged Friday with hacking the Presidential campaign of the Democratic candidate Hilary Clinton.

The summit – in which the two leaders are being joined only by their interpreters – comes after a tumultuous European tour that saw Mr. Trump criticize allies of the US over trade and military spending.

In the meantime, US National Security Adviser John Bolton has confirmed that both sides have agreed that the meeting will have no set agenda.

Still, he noted that he found it “hard to believe” Mr. Putin did not know about the alleged election hacking and the subject would be mentioned.

Bolton affirmed: “That’s what one of the purposes of this meeting is, so the President can see eye to eye with President Putin and ask him about it’’.