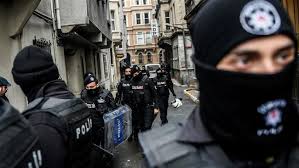 As President Tayyip Recep Erdogan is having a closed door meeting with loyal Commanders and his cabinet in Ankara, authorities have banned all academics from travelling abroad, just as the ongoing purge of state employees is being connected to the failed coup.
As at Wednesday, over 50,000 people have been rounded up, sacked or suspended from the service.

The purge has also affected about 1,577 University deans (faculty heads) – asked to resign in addition to 21,000 teachers and 15,000 education Ministry officials.
The affected so far were believe to have links with the alleged mastermind of the coup, a US-based cleric Fethullah Gulen. The suspect has however denied involvement.

After President Erdogan emergency meeting of the National Security Council, he is expected to make further announcements later on Wednesday.

The world Human rights group Amnesty International (AI) has warned against the extension of the purges to media outlets and journalists, including those critical of government policy.
It said: “We are witnessing a crackdown of exceptional proportions in Turkey at the moment.

In the same vein, Amnesty’s Turkey researcher Andrew Gardner reasoned: “While it is understandable, and legitimate, that the government wishes to investigate and punish those responsible for this bloody coup attempt, they must abide by the rule of law and respect freedom of expression”.