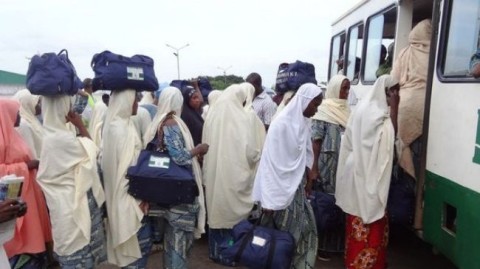 A religious group named the Muslim Rights Concern has blasted the military for barring a Saudi-Arabia bound flight from flying from Borno state to perform the ‘Umrah (Lesser Hajj).

The group described the action as not only hostile but “as an unnecessary flexing of muscles.”

A statement issued by the group and signed by its Executive Director Dr Ishola Ishaq reads in full:

“The Nigerian military yesterday (Friday) barred a plane waiting to ferry 278 Muslims to Saudi Arabia from taking off. The aircraft was to take Muslims to the Holy land in order to perform ‘Umrah (Lesser Hajj). The military’s action also affected another aircraft chartered by a serving senator for the purpose of ferrying Muslims sponsored by him to Saudi Arabia to perform ‘Umrah.

“The Muslim Rights Concern (MURIC) considers this as an unnecessary flexing of muscles. For now, we will stop short of calling it an hostile act calculated to cause logistic and psychological dislocation to innocent and harmless Muslims who were merely going to perform a religious duty. The military’s action has succeeded in making Nigerian soldiers unpopular in an environment where they need the goodwill of the same victims of their high-handedness to defeat insurgents.

“It is one of the worst miscalculations in human relations committed by the Nigerian Army in Boko-Haram-infested North Eastern Nigeria. Many questions remain unanswered from this action. Exempli gratia, is the army being used as a tool for embarrassing Muslims and truncating efforts aimed at achieving spiritual fulfilment? Who gave the order to stop the plane from taking off and why? Is it another ‘order from above’? Is Aso Rock aware of this? Is this another anti-Muslim action of a Christian president and are we to expect more of such?

“Tongues are wagging and Nigerian Muslims are already asking questions. MURIC therefore demands an explanation for this action from the military. We also expect some comments from the presidency. Is Mr. President aware of this unpalatable development or not? Did Mr. President order Nigerian soldiers to disallow aircrafts taking Nigerian pilgrims to Saudi Arabia to perform a religious duty from flying?

“MURIC reminds Nigerian authorities at all levels that the 1979 Nigerian constitution guarantees freedom of religion. We warn that those who strangulate religious freedom are merely creating tension. It will be highly hypocritical for us to be talking about peace when we commit open rape on justice. We charge the relevant arms of the National Assembly to investigate this matter as a matter of urgency.”