Unbelievable: Man Ties His 7 Children To Wheelbarrow, Solicit For Buyers 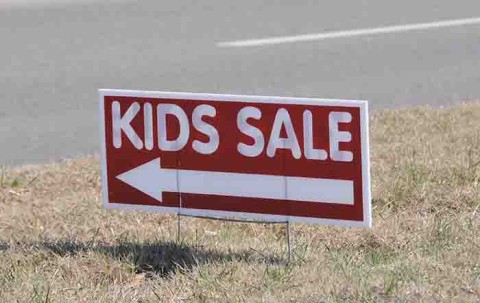 What could be best described as mother of all Nigerian Nollywood movie was displayed in Owerri, the Imo State capital on Thursday, when a 44 year old man, identified as Isreal Dike, tied his seven children, including his triplet, to a wheelbarrow and was heading to an unknown destination before officials of the Ministry of Women Affairs and Social Development intercepted him.

The children’s hands were completely tied to the said wheelbarrow, while the man was moving from street to street soliciting for buyers of the kids.

Dike, had told passersby who cared to listen that he decided to take the action because he could no longer fend for the children.

However, a staff of the women affairs ministry, who pleaded anonymity told newsmen that, “Following a tip off, a high powered team led by the Commissioner for Women Affairs, Mrs. Nma Onyechere, quickly went and rescued the children.”

Apart from saying that his plan was to sell some of them so as to enable him take proper care of others, frustrated Dike, also accused the state Governor Rochas Okorocha of landing him into his current hardship.

His words: “Owelle Okorocha is the cause of what I am passing through today. He made a promise to me in the past and has failed to redeem it till today,” he stated.

Addressing newsmen at the scene of the drama, the Imo women Affairs Commissioner, described Dike as a “depressed man, who is mentally derailed.”

While urging Dike’s wife to go for family planning, the Commissioner, promised that government would carefully ascertain the level of the man’s mental problem, with a view to taking up the issue.