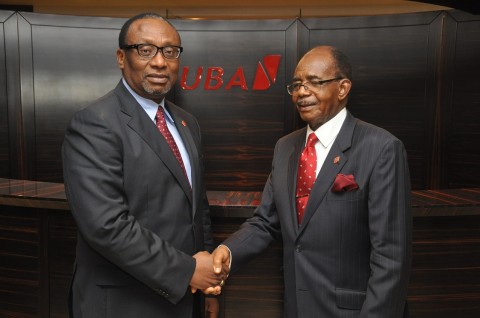 United Bank for Africa (UBA) Plc, the pan- African financial services group is delighted to announce the appointment of Ambassador Joe Keshi as Chairman of the Board. Ambassador Keshi was appointed to the Board of UBA in 2010 and was made Vice Chairman on January 1, 2011. 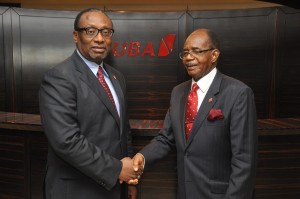 The Outgoing Chairman, Chief Israel Ogbue (right) congratulating the new Chairman, Ambassador Joe Keshi during the meeting of the Board of Directors of United Bank for Africa Plc in Lagos.

He has over 35 years working experience at the highest levels of government as a career diplomat, serving as Permanent Secretary, Ministry of Foreign Affairs, Permanent Secretary, Cabinet Secretariat, The Presidency, Charge d’Affaires, Embassy of Nigeria, The Hague, Netherlands and Consul-General of Nigeria, Atlanta, Georgia.
Ambassador Keshi’s appointment follows the retirement of Chief Israel Ogbue, a member of the UBA Board since 2005 and Chairman since January 1, 2011. “It has been a pleasure serving the Bank. I have worked with a group of men and women who have been responsible for forging an extraordinary transformation in Nigerian and African banking. Ambassador Keshi is an admirable choice to lead the Bank in its next growth phase” said Chief Ogbue.
The Board also appointed Mrs. Rose Ada Okwechime as Vice Chairman. Mrs Okwechime is the Managing Director of the Abbey Building Society Plc and has played a leading role in financial services for over 20 years, including time spent with the Bank of England.

Both appointments are effective November 21, 2013.

Ambassador Keshi speaking on his appointment said “I am touched that my fellow board members have asked me to chair the Board. Chief Ogbue has raised the bar on governance, transparency and business growth. We will sustain the strong governance and risk management structures in place and maintain the momentum of our pan-African growth strategy”.
Phillips Oduoza, UBA’s Chief Executive, speaking on behalf of the executive management said, “We are looking forward to working with the new Chairman and Vice Chairman, even as we will miss the wise counsel and insights of Chief Ogbue. We are privileged to have the combined experience of Ambassador Keshi and Mrs Okwechime, one of the four distinguished women on our board”.