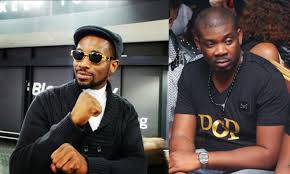 LAGOS, NIGERIA (AFRICAN EXAMINER) – If the current exchange of posts on socio media among members of the defunct Mo Hits Squad is anything to go by, then reunion among the parted members may be imminent.

This is evident in Marvin Records boss – Don Jazzy and Koko Master, D’ Banj and Michael Collins have announcement on their willingness to embark on ”Reunion Tour”.

On his own, Don Jazzy, also from instagram @donjazzy “@iambangalee asked: ”how many states/countries should we give them?”

Other details such as dates, venues or artistes expected to perform during the tour were not mentioned in the posts.

It would be recalled that the group was founded in 2004; held sway in Nigerian music scene between its founding year and 2012.

However, members separated in 2012.

After the break up in 2012, Don Jazzy established Mavin Records and took along with him, young artistes like: D’ Prince, Dr. Sid and Wande Coal.

D’Banj, on the other hand, signed a record deal with American Kanye West’s ‘Good Music.’

D’Banj on the other hand, after signing a record deal with American Kanye West’s – ‘Good Music, founded DB Records where he signed his younger brother, K-Switch, alongside two producers Jaysleek, Deevee and later Tonto.