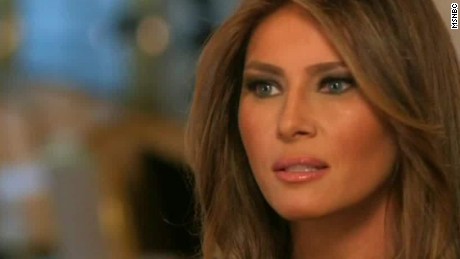 Melania is being accused of copying in her speech at the first day of the Republican National Convention, a portion of the incumbent President Barrack Obama’s wife Michelle’s speech in 2008 Democratic Convention.

The speech which pundits spot similarities with Michelle’s praised her husband, Donald as a “compassionate” man who would “fight” for his country.

The alleged adopted lines by Melania read in part: “My parents impressed on me the values that you work hard for what you want in life; that your word is your bond and you do what you say and keep your promise; that you treat people with respect.”

Whereas, the original version by Mrs. Obama in 2008 read in part “And Barack and I were raised with so many of the same values: that you work hard for what you want in life; that your word is your bond and you do what you say you’re going to do; that you treat people with dignity and respect, even if you don’t know them, and even if you don’t agree with them.”
In their reaction, Mr. Trump’s team traced the allegation to his Democratic counterpart and former first Lady, Hillary Clinton.

Trump’s new campaign Manager Paul Manafort, said “There’s no cribbing of Michelle Obama’s speech”.
He contended that the address was her first speech of the campaign, adding that she had the support of his speech writing team.

Similarly, Trump’s Communications Adviser Jason Miller in a statement claimed “In writing her beautiful speech, Melania’s team of writers took notes on her life’s inspirations, and in some instances included fragments that reflected her own thinking.

“Melania’s immigrant experience and love for America shone through in her speech, which made it such a success” Trump who described the speech as “absolutely incredible”, added.