US Consul General Urges Nigeria to Prepare For Credible 2015 Polls 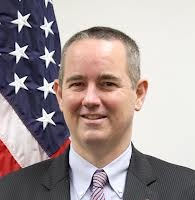 United States Consul General, Jeffrey Hawkins, has reiterated the need for Nigerians to be equipped for the next general election in 2015.

Speaking on Tuesday at the Hubert H. Humphrey Fellowship annual lecture for 2013, titled: “The Democratic Journey in Nigeria: Learning from the American Experience”, the Consul General said that “The government should sustain a credible national election management body, improve public awareness and confidence in the electoral bodies, promote credible, transparent and sustainable electoral process, improve the democratic quality of political engagement, and strengthen channels of civic engagement”.

He cited the United States as an example, where citizen shape their government and its policies by getting involved in their communities and fully participating in the American democracy, which include the rule of law, separation of power, representative government, fundamental human rights, and a system of checks and balances.

Nigeria is the most strategically important country in sub-saharan African, hence a vibrant and growing Nigeria is important as its affects the United States, Africa and global community. It is the largest oil producing state in Africa, fifth largest supplier of crude oil to the United State, and the tenth largest global producer.

Mr. Hawkins noted that despite Nigeria’s progress, and optimism about Nigeria’s future, serious challenges remain. Some of them are based on decades of ineffective governance and lack of accountability of elected officials, lack of integrity in the electoral process, continued pervasive corruption, security challenges, deeply entrenched poverty and escalating youth unemployment

He urged the Humphrey Fellows present to do more in fostering national development by sharing their talent, knowledge, experiences, and time in order to put Nigeria on center stage in the comity of nations.

Meanwhile, Director General of Obafemi Awolowo Institute of Government and Public Policy, Professor Adigun Abaje, has called on the government to have human feelings for the citizens. Speaking with African Examiner at The Hubert Humphrey Annual lecture on Tuesday, he stated that everybody will benefit from good democratic governance if all Nigerians selflessly follow the rule of law.

In his opinion, all Nigerians should participate in governance, any government found wanting should be called to account by the people, he also stated that a multi party system cannot succeed in Nigeria, because of the diverse ethnicity, religion and demographic status of Nigeria, ruling party needs opposition so as to check their activities.

Responding to the issue of god-fatherism, prevalent in Nigeria, he said, “although the Nigerian culture has a place for respecting elders, however it does not  support god-fatherim, in the old Yoruba kingdom, there are principles of checks and balances. So, god-fatherism should not have a place in Nigeria society”.