US Election 2016: Obama Urges Americans To Save The World; Vote For Clinton 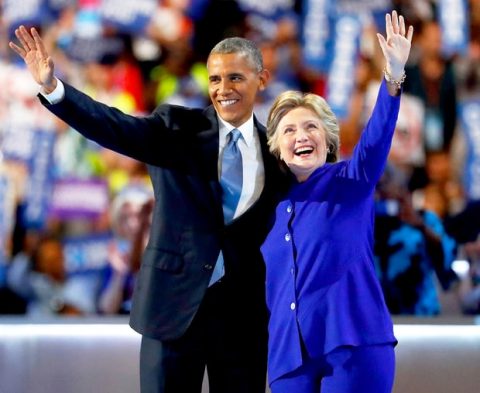 BALTIMORE, MD (AFRICAN EXAMINER) – Less than a week to the decisive election, US President Barack Obama has urged Democrats of all ethnic backgrounds to get out and vote for Hillary Clinton, warning that the fate of the US republic – and the world – is at stake.

He said Mrs. Clinton’s Republican opponent Donald Trump was a threat to hard-earned civil rights.
President Obama said these while speaking at a rally in North Carolina.

But the Republican candidate Mr. Donald Trump has urged Mr. Obama to stop campaigning for Mrs. Clinton and focus on how to run the country.

“The bottom line is, no-one wants four more years of Obama,” he told supporters in Pensacola, Florida.
He said Mrs Clinton had become “unhinged” in recent days, saying that Americans would vote for the candidate they want to see in the White House next Tuesday.

These are coming amidst recent polls, showing the head-to-head race between Mrs. Clinton and Mr Trump.

President Obama told supporters in the key battleground state of North Carolina “The fate of the republic rests on your shoulders.”

“The fate of the world is teetering and you, North Carolina, are going to have to make sure that we push it in the right direction.

However, Mrs. Clinton’s chance of clinching victory now appears dicey, as she currently faces FBI investigations on new emails use.

The agency’s director, James Comey, has however faced a fierce backlash for announcing the move just 11 days before the presidential election.

Earlier, Mr Obama implicitly criticized him over the new inquiry into Mrs Clinton’s email use.