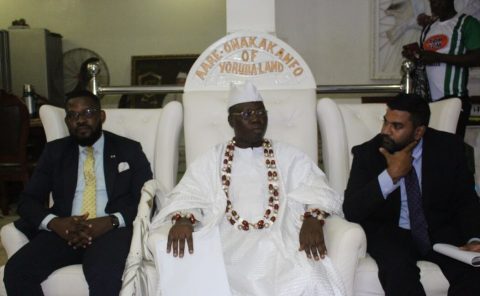 (AFRICAN EXAMINER) – The United States of America has sought the views of the Aare Onakakanfo of Yorubaland, Iba Gani Adams, on the security situation in the country.

A two-man team of officials from the US Embassy in Lagos, led by the Political Officer, Shashank Iyer, met with Adams on Monday in his Lagos home on the issue.

Accompanied by the Embassy’s Political Specialist, Arnold Abulime, Iyer told Adams and some members of the Aare-in-Council who joined him in receiving them, that the US was concerned about the tension in the country, especially now heightened with the introduction of Ruga.

Iyer said the concern of the US is how all ethnic groups in the country can live peacefully.

He said it has been observed that the people of the country have the capacity to pull through hard times economically, but some touchy issues such as Ruga have the tendency to make them drift apart.

He added: “It is tricky getting all to live together, so that is why there is the need to meet and share perspectives.

“We need to be able to move the needle forward together in Nigeria, deal with ethnic issues capable of destabilising the country.

“Nigerians will always find a way around economic issues, but ethnic issues have a way of destabilising the country.”

In his response, Adams said the solution to all the crises bedevilling the country lies in restructuring the polity.

He said he believes that the country’s numerous problems will be resolved within four years if the President Muhammadu Buhari Administration agrees to restructuring.

The Aare Onakakanfo said: “It is not in the world’s interest for Nigeria to go to war.

“The world will be affected.

“With a population of over 200 million, every part of the world will feel the disintegration of Nigeria.

“Most of our problems will be solved in four years once restructuring takes place.

“Our system is going to a state of collapse, especially with the Buhari Government in the last four years.

“And it can only get worse.

“If Buhari does not restructure, it will get worse.

“To save this country, the only way is to accept the report of the Constitutional Conference of 2014 or revert to the 1963 Constitution.

“As it now, no zone is peaceful anymore.

“Even in Katsina, the President’s state, two traditional rulers were kidnapped without trace till today.”

Aare Adams said the US had indeed helped Nigeria before now with the restoration of democratic rule in 1999, hailing the former US Ambassador to Nigeria, Walter Carrington, for the role he played.

He said without such intervention now, a revolution is imminent in Nigeria, adding: “Lessons from Ilorin and Lokoja in the past when the Fulanis came to require for land for their cattle are imperative.

“They gradually took the place over.

“The same happened in Plateau and Southern Kaduna.

“The history and antecedents of the Fulanis do not make it possible for any sane Yoruba man to accept Ruga.”

Adams also presented some documents, which he said contained part of his position, to the team from the Embassy before the closed-door meeting began.

They all spoke in support of the restructuring of the country and opposed the Ruga policy of the Federal Government.

They also questioned the spending of money on the Ruga initiative when several other Nigerians running their private businesses have not benefitted in any form from the Federal Government and with many going hungry.