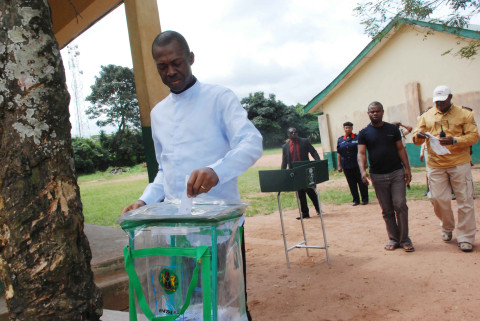 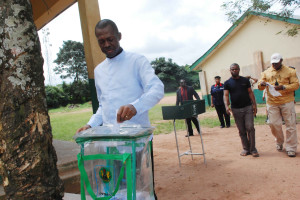 African Examiner reports that an Enugu state High court, presided over by Justice A.O Onovo, had last Thursday granted an order for judicial review against ENSIEC.

The orders followed two different suits filed by APGA candidates in Ezeagu and Isi-Uzo council areas, where it ordered the electoral body to stay action.

Despite the fact that the Dr. Boniface Eneh, led ENSIEC, disqualified virtually all the opposition candidates, the exercise still witnessed serious apathy and violence in places like Isi Uzo.

Following the crisis that erupted in Isi Uzo council area between the ruling PDP and All Progressives Grand Alliance APGA, the opposition party has called for cancellation of the election.

There was low turn out of voters virtually in all the places visited in the state by our correspondent.

Besides, there were reports of late arrival of material in some areas that received materials at all.

Speaking to African Examiner, Mr. Hyginus Egbo, a native of Umualor ward in Isi-Uzo confirmed to our reporter that PDP and APGA had serious clash earlier in the day.

At Ikem Umuaram polling centre, an APGA polling agent, Monday Ugwu alleged that he was asked by both the civil defence operatives, and adhoc staff of the Enugu state Independent Electoral Commission, ENSIEC, and PDP stalwarts to disappear from the scene or get hurt.

Enugu state Governor Sulivan Chime however expressed satisfaction with the successful and peaceful conduct of the elections.

Chime who spoke shortly after casting his vote at Premier School Udi, said the conduct of the election, which is fourth since the inception of his administration in 2007 was worthy of emulation.

He attributed the comparatively low turn out of voters for the election to the fact all the Chairmaship candidates and most of the councillorship candidates were running unopposed.

The governor, called on the people to imbibe and sustain the culture of exercising their civic responsibility by casting their votes during elections.

Also speaking to newsmen, the country director World Youth Peace Mission Abuja, Chief Boniface Okafor who were in Enugu with his team to monitor the election, observed that the exercise was free an fair.

He also commended the regular conduct of local government elections in the state, describing it as healthy to the nation’s democracy.

In an interview,the presiding Oficer for Udi/Agbudu ward Mr Ernest Chime and a voter Dr Ngozi Agu noted that the election was conducted in a peaceful and orderly atmosphere.

Meanwhile, the official announcement of the result of the polls by ENSIEC is still been awaited at the time of filing this report.