Wailing As Police Demolish 500 Houses In Lagos, Properties Worth Billions of Naira Destroyed 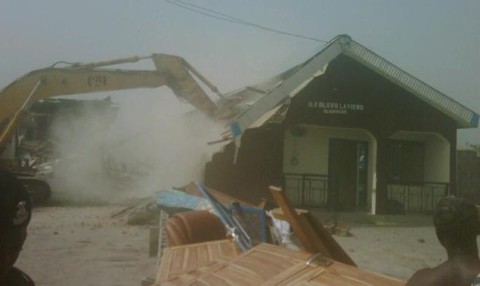 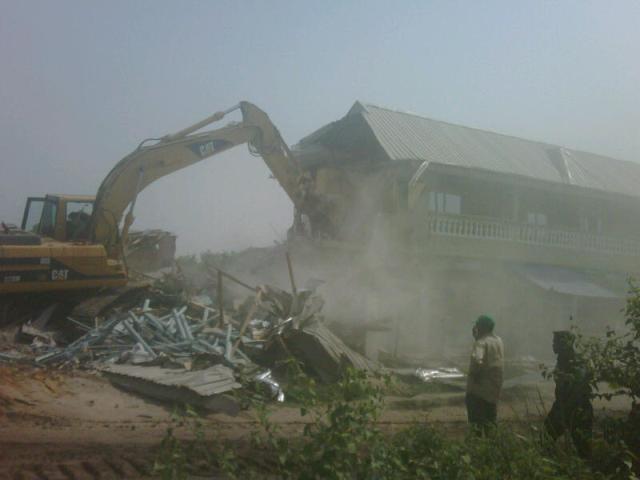 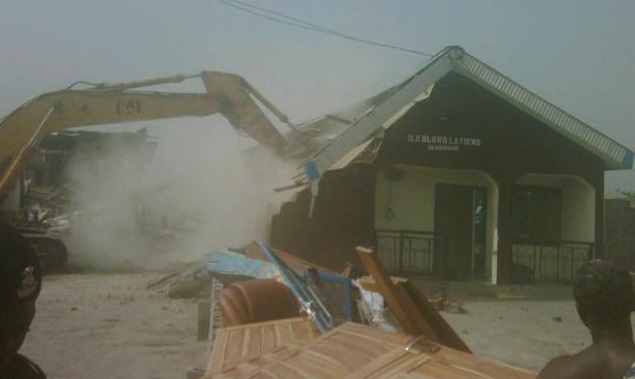 It was weeping and wailing in Badagry area of Lagos, Nigeria on Monday as over 200 police men from the Lagos State Police Command demolish over 500 buildings erected on a land meant for Police Estate. 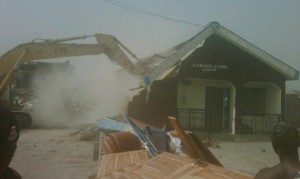 The police had stormed the 950 plots of land (65 hectares) around 10 am fully armed and with about seven bulldozers and began demolition immediately as residents watched helplessly as properties worth billions of naira were being destroyed.

The Inspector General of Police had ordered the Lagos State Police Command to immediately take possession of the land which the police acquired about seven years ago and got the C of O from the Lagos State Government in 2008.

Men, women and children wept openly as they see the properties they struggled to build went down in few seconds as the bulldozers have no mercy. Some of them were only allowed to park some of their properties before their houses were demolished.

The operation was led by the Area Commander, Area ‘K,’ Assistant Commissioner of Police, Osu Ekpo. Officers from the Rapid Respond Squad, RRS, Taskforce and police from Area ‘K’ took part in the operation at the land located at Atinporome, Mowo Phase II, Badagry.

Residents were at home when the policemen swooped on them unannounced. Plea by residents to give them time to look for place to park their properties fell on deaf ears as the police swung into action.

A top police source, who craved anonymity told African Examiner that the police first issued eviction notice to the illegal occupants to vacate in 2011 and issued another one three weeks ago, but that the residents refused to leave. 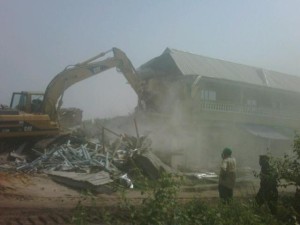 Taskforce Chairman, Bayo Sulaiman, who said he could not comment on the matter, said it is the Lagos State Police Command that is in charge, but said that residents encroached on the land as the police had a genuine title document to the land as well as C of O which was signed by Governor Babatunde Fashola in 2008.

According to him, land grabbers, popularly known as Omo Onile sold the land illegally to unsuspecting members of public, adding that the action was taken because the police wanted to claim the land to build an estate for its officers.

It was gathered that the police wanted to use the land to build estate for senior police officers but left it for too long after obtaining the C of O, which allowed Omo Onile to resell the land to property buyers.

Residents claimed that they acquired their properties from Omo Onile, but that they did not obtain C of O or building approval from the Lagos State Government.

A landlord, Waidi Yakubu from Kwara State said he built his magnificent house nine years ago and that he had lost all as the house was demolished, saying that he bought the land from a genuine source but did not have C of O, while appealing to the state government to come to their aid as they had nowhere to go.

Property owners wanted to resist the demolishers at the initial time but were overwhelmed by the police who were fully armed with guns.

Some residents fled on citing the police as they feared that they might be arrested for encroaching on police’s land illegally.

Efforts to get the Police Public Relations Officer, PPRO, Lagos Police Command, Ngozi Braide proved abortive as she did not pick several calls made to her phone.