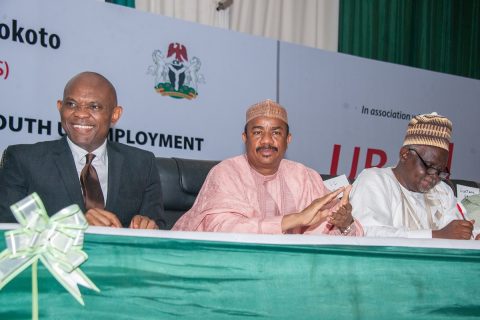 (AFRICAN EXAMINER) ―The Sultan of Sokoto, Sultan Muhammadu Sa’ad Abubakar III, commended the Tony Elumelu Foundation and its Founder, Tony O. Elumelu for their contribution to entrepreneurship and creation of jobs for young people in the North.

The Sultan made this commendation during a courtesy visit paid by Tony Elumelu, Chairman of UBA Group and Founder of Tony Elumelu Foundation, shortly before the National Dialogue Series at the Usman Danfodiyo University, Sokoto, where Elumelu gave a speech to university students and civic leaders. The Sultan of Sokoto stated that Elumelu’s intervention, through his Foundation, and entrepreneurship advocacy has created jobs and helped in creating security in the North by keeping idle youths off the streets.

“We need more Tony Elumelus. We need more Aliko Dangotes,” he said. “We continue to appreciate what you are doing for our youth because when you take these children off the streets, you provide the means for them to live a simple life. In that regard, we have a bit of security”.

Tagged “Entrepreneurship: An Antidote to Nigerian Youth Unemployment”, the ensuing event, which was held at the University Campus of the Usman Danfodiyo University, Sokoto, was hosted by its Vice Chancellor, Professor Abdullahi Abdu Zuru, who commended Elumelu on his dedication to encouraging entrepreneurship among the youth.

“We have been following your activities. Of recent the activity that caught our eyes is the Tony Elumelu Foundation Entrepreneurship Programme where you set aside $100million for the next 10 years to ensure that African youth, not only Nigerians but African youth develop Africa,” he said

In reply, Elumelu appreciated the university for the opportunity to share his message of Africapitalism with the students. He charged the students to adopt the philosophy, noting that it would help them understand their place in transforming Africa.

“To attain long term success, I want you to adopt Africapitalism as a guiding philosophy. I want you to develop a keen sense of awareness that Africa is in dire need of leaders both in the private and public sectors and your ideas can indeed transform the continent,” he said to the students.

He further challenged the students to take on entrepreneurship as a means of eradicating poverty and creating more jobs in the society.

“Only entrepreneurs can create the millions of jobs we need to power our economy out of poverty,” Elumelu said.

He charged them to assume responsibility for developing the African continent, saying: “Nobody but us will develop Africa. Africa’s destiny lies in the hands of all of us, Africans,” he concluded.