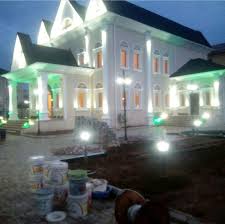 Photo: One of the properties belonging to Governor Wike

(AFRICAN EXAMINER) – The APC chairman in Rivers State, Ojukaye Flag-Amachree has called on the Economic and Financial Crimes Commission  (EFCC) and the Independent and Corrupt Practices Commission (ICPC) to probe the source of money used by Governor Wike in acquiring the sprawling properties he now owns on Ada George Road in Obio/Akpor LGA, Rivers State.

The chairman who made the call while speaking to  journalists in his office lamented that never since the creation of Rivers State has any Governor recklessly acquired or built properties while in office the way Wike is doing.

His Words: “It is no news that the Gov. Wike-led administration has failed woefully in governance of Rivers State. A critical assessment of the Educational, Health, Agriculture, Social Infrastructure, Job Creation and Security Sectors leaves a pitiable testimony and a soured taste in the mouth save for the charade of projects commissioning displayed to insult the sensibilities of Rivers people.

“Three years and counting, Wike has consistently lavished the resources of the poor people of Rivers State on choice properties on Ada-George where he owned only a single structure before he took the oath of office to protect lives and property. While Rivers people languish in poverty, tuition fees of their wards abroad are stopped, workers of Timariv disbanded and so on, Gov. Wike is acquiring more properties running into billions of Naira with threats to revoke the Certificate of Occupancy of those who have refused to sell their properties to him.

“Irrefutable records provide evidence that while Wike spends whooping sums of money to pay off the property owners, expatriate personnel have been contracted for the design, building, furnishing and securing of the latest property he acquired for himself. As I speak, he has closed down and paid off a school, which formerly was about five properties from his known residence. This governor has succeeded in completing more projects for himself as compared to projects in his own Local Government Area – Obio-Akpor in the last three years,” Ojukaye alleged.

The APC chairman said he sympathised with those whose properties Gov. Wike had forcefully taken and for those who have refused to yield to pressure being mounted on them by the governor adding that come 2019 the governor will give account of his service to Rivers people.