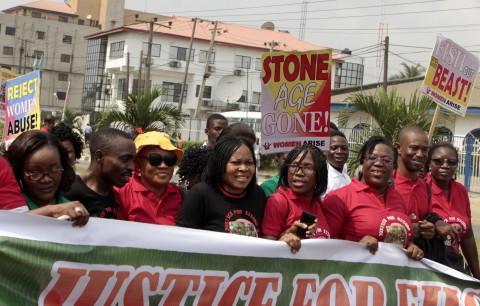 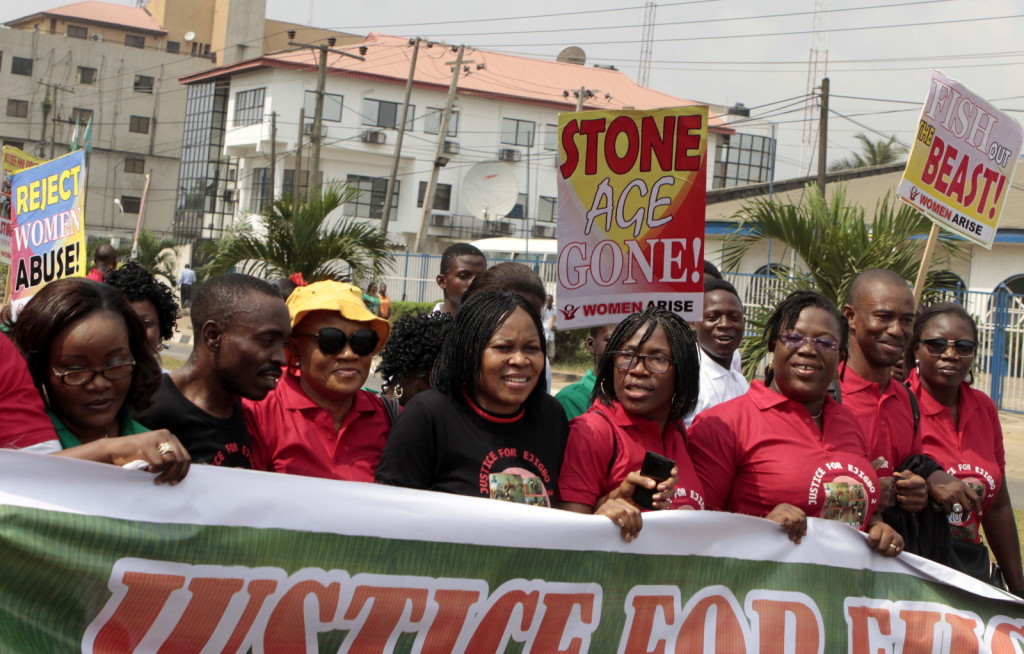 In Case You Missed the Controversial Video:

Hundreds of women have staged a protest in Lagos over dehumanizing treatment meted out on two women in Ejigbo area of Lagos, Nigeria for allegedly stealing pepper.

The women, under the aegis of Women Arise for Change Initiative staged a protest walk from the Lagos Television to the Lagos State House of Assembly, Ikeja carrying placards and called for justice.

There was outrage across the nation and around the world recently when video shots of the two female victims stripped naked, and being mercilessly beaten with pepper and sodomised with strange objects went viral on internet. The women were accused of stealing pepper.

The protesters carried some of which read: “Punish the Criminals,” “Stone age gone,” “Fish out the beast,” “Greed of leaders grinds the future of girls; end corruption,” among others.

Spokesperson of the protesters and President, Women Arise for Change Initiative, Dr. Joe Okei-Odumakin said the women had petitioned the Speaker of the Lagos State House of Assembly, Adeyemi Ikuforiji to ensure that those who dehumanizingly ill-treated the women should be brought to book.

In the letter to the speaker, Okei-Odumakin said “indeed, there was outrage across the nation and around the world when video shots of the victims stripped naked, and being mercilessly beaten with pepper and sodomised with strange objects went viral. As Nigerians and fellow citizens of the world watched the horrific scenes, they wondered if these were shots taken in the dark ages of savagery and primitivism.

“Strangely enough, a statement this month by the Chairman of Ejigbo LCDA, Kehinde Bamigbetan at the height of the furore, acknowledged that this unimaginable horror took place in his domain in February this year, and that the victims were a mother and step daughter accused of stealing pepper, and that the husband and father was a palm-wine tapper; but Bamigbetan’s Statement sadly to say, failed to outline the measures his office had taken since then to assure justice for the victims and ensure that the perpetrators are punished.

“Ironically, it is the same Bamigbetan whose gruesome kidnap few months back elicited genuine emotions and public goodwill, and the Lagos State Government and concerned Nigerians spared nothing to guarantee his release, and bring the kidnappers to book. Why did he appear to have turned a blind eye over the ordeal of the victims, and why is he just acknowledging to the public these atrocities after ten good months? Or is that the victims lives are of no value to him because they are pepper sellers from the household of Mr. Palm-wine tapper?” She asked.

According to Okei-Odumakin, Women Arise for Change Initiative held the belief that all peoples, including women were created equal by God and that they were therefore equal before the law, saying that women’s rights were human rights.

To this end, she stated that the women requested and urged the speaker use his offices to set up an inquiry into this shameful incident and compel the Ejigbo LCDA Chairman, Kehinde Bamigbetan to share his knowledge of the crime and what he had done in tracking down the purveyors of these bestialities so that they could be brought to justice and that adequate provisions must also be made to rehabilitate the victims, peradventure they survived these cruelties.

“We strongly believe that there is a redemptive value for Lagos State in fishing out these criminals for punishment so that the State is not seen as a haven for atrocious human rights abuses, where barbaric and savage acts are tolerated by government officials; that is surely not a good face to present to potential investors and tourists to the commercial hub of the nation.

“This is certainly one issue that will not die until justice is done, and we trust that you will act quickly and ably, and use your good offices to ensure that justice is done, for justice too long delayed is justice denied,” she said.