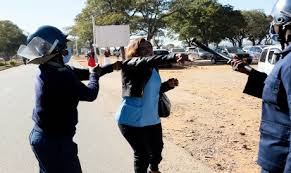 The nurses are demanding to be paid in US dollars, saying that inflation, which is running at nearly 800%, is eroding their salaries.

“At least 13 of our members and union leaders were arrested during the demonstration at Harare hospital,” Enock Dongo, the president of Zimbabwe Nurses’ Association, tells AFP news agency.

“They are in police cells as we speak but we don’t know what charges they are facing,” he adds.

According to AFP, the union says they have been told that the arrested health workers would appear in court on Tuesday.

The Zimbabwe Nurses’ Association, which represents around 15,000 state nurses, had last week called on members to strike over low pay.

Coronavirus remains a concern in the country, with 716 recorded cases including eight deaths.