Zimbabwe: Mugabe is Removed From his Ruling Party, Faces Impeachment 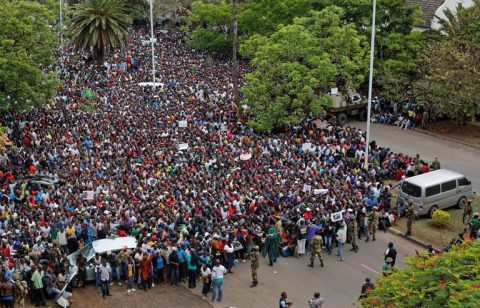 (AFRICAN EXAMINER) – President Robert Mugabe’s own party voted to oust him as its leader on Sunday, a day after thousands of Zimbabweans took to the streets to celebrate his stunning fall from power after a military takeover.

The governing ZANU-PF party, which held emergency talks at its headquarters in the capital, Harare, to consider the fate of the president who had ruled for 37 years, appointed the previously fired vice president, Emmerson Mnangagwa, as Mr. Mugabe’s successor.

Under the Constitution, Mr. Mugabe remains president, even if in name only. But if he does not resign by noon Monday, the committee members decided, he would face impeachment by Parliament.

Cheers and dancing broke out in the building after the vote, according to video shared on social media.

Before the committee’s decision, Chris Mutsvangwa, a war veteran who has led the campaign to oust Mr. Mugabe, said as he went into the meeting, “We are going all the way,” according to Reuters.

He said that Mr. Mugabe should just resign and leave the country: “He’s trying to bargain for a dignified exit but he should just smell the coffee.”

The central committee also expelled the president’s wife, Grace Mugabe, as head of the ZANU-PF Women’s League. Mrs. Mugabe, widely viewed as his likely successor, has not been seen in public since Wednesday.

On Sunday, she was barred from the party for life, along with several other government officials — including Jonathan Moyo, the minister of higher and tertiary education.

The downfall of the 93-year-old autocratic ruler began with a military takeover on Wednesday. Once respected as a liberation icon who went into exile after fighting colonial rule, Mr. Mugabe became isolated from fellow party officials.

Other veterans of the fight for independence from white-minority rule joined the march on Saturday as Zimbabweans poured into the streets and danced, sang and shouted with joy at the prospect of Mr. Mugabe’s rule ending.

After voting to fire Mr. Mugabe as party leader, the party committee took up the matter of impeachment.

Innocent Gonese, the parliamentary chief whip from the Movement for Democratic Change — Tsvangirai party, told The A.P. that when Parliament resumed this week, the chamber would “definitely” put in motion a process to impeach Mr. Mugabe./New York Times