Zimbabwe Orders Tough Measures as Another 42 Die In Bus Accident 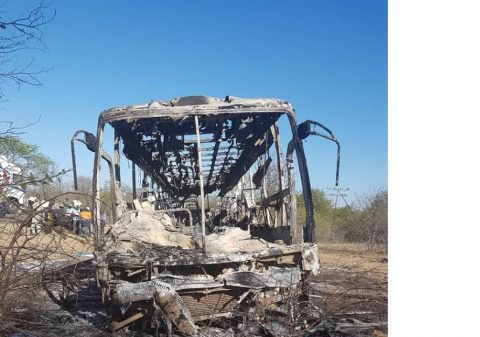 (AFRICAN EXAMINER) – Zimbabwean President Emmerson Mnangagwa on Friday sent a condolence message after yet another 42 people died on Thursday night when a bus they were traveling in caught fire along the Bulawayo-Beitbridge road in southern Zimbabwe.

At least another 20 people were also injured in the accident.

The accident is the second major fatal accident in Zimbabwe barely two weeks after 50 people died in another bus accident on Nov. 14 near Rusape along the Harare-Mutare highway.
Also in June 2017, 43 people were killed in a bus crash in the north, along the highway leading to neighbouring Zambia.

Thursday’s bus was coming from Zvishavane in the Midlands Province and was travelling to Musina in South Africa.
Mnangagwa said the accident points to the growing risks on the country’s roads requiring urgent and drastic interventions.

“What is heart-rending about this latest accident is that combustible material was allowed onto the bus, thus causing a conflagration which entrapped, scalded and consumed innocent passengers,” the president said.

Mnangagwa said the latest accident must jolt the nation to re-look at its traffic laws and traffic enforcement practices in order to prevent placement of all incendiary material on public transport vehicles.

“As before, I urge the ministry of transport to use the two accidents which have occurred hard on the heels of each other to take appropriate measures which comprehensively deal with this growing menace on our roads,” the president said.

He said the government would declare the accident a national disaster.