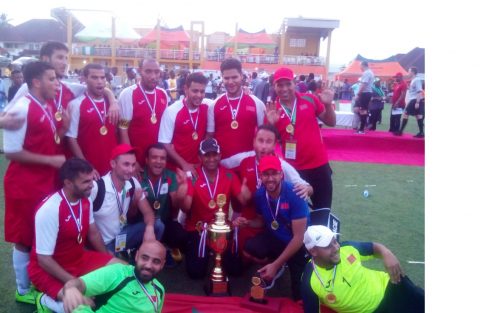 The competition, which was attended by eight African nations, was organised by the international Blind Sports Association (IBSA) and solely sponsored by an Enugu based nongovernmental organization NGO, Bina foundation.

With the victory, the Moroccan team, which is also the defending Champions, are to represent Africa in the 2020 paralympic games at the Tokyo, Japan Olympics.

The Championship which served as the African qualifier to the 2020 Olympics, was attended by Nigeria’s Blind football national team, Star Eagles, as well as those of Mali, Cameron, Libya, Morocco, Egypt, Nige-Republic and Ivory Coast which competed for the Africa’s sole ticket to Tokyo.

To emerge overall winner, the Moroccan side defeated their Malian counterpart 5-1 in the final match played on Sunday at the Rangers Inter. FC training pitch, while Ivory Coast beat host Nigeria team 2-0, to book the 3rd position.

In her remarks, elated president\ founder of Bina foundation, Lady Ifeoma Atuegwu, explained that she and family established the foundation with a view to promoting social integration and economic empowerment through blind football “and to increase playing opportunities for footballers of all abilities

She added that “it is a thing of joy that our collective struggle to developed and promote blind football in Nigeria and Africa and to give a rewarding identity to the blind through football has not been in vain, as the beautiful game is gaining solid ground in the continent

Lady Atuegwu, noted that the competition which began on November 22nd and ended Sunday, December 1st, 2019, has opened a door of friendship and lasting relationship between the blind footballers from various countries.

The Bina boss, equally thanked IBSA, for giving her organization the opportunity to host the continental competition, adding that all the countries that participated did well.

She hinted that this is the first appearance of Nigeria blind football team known as Star Eagles in an international championship.