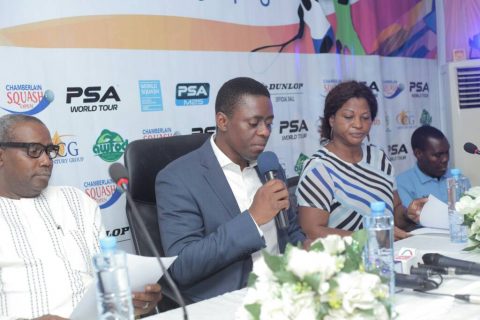 (AFRICAN EXAMINER) – The 2nd edition of ‘’Chamberlain Squash Open’’ CSO Championship is set to take-off in a grand style in Lagos, with the star prize of $25,000 and determination to make it ‘’bigger and better in all ramifications’’.

CSO Promoter and a Lagos-based frontline broadcaster, Chamberlain Usoh disclosed this Friday at a press conference to usher in the tournament which is slated for Sunday, May 6 to Saturday, May 12, 2018.

The 2nd edition of the Championship Usoh indicated was duly sanctioned by the Professional Squash Association PSA; the body he added has also increased the number of PSA-ranked players who will be participating in the six-day tournament.

Specifically, Usoh confirmed that a total of 32 PSA ranked foreign players and 25 local players were going to compete.

A total of $12,000 cash prize was won by (male and female) in the pioneer edition of the tournament last year.

Apart from this, the winners will also go with trophies, while consolation prizes would be presented to the fans.

One of the unique dimension of the about to start Championship Usoh revealed is the presence of an international official, Mr. Naseer Sayeed  Zahran Mohamed, being designated by the World Squash Federation WSF, as the main tournament Referee.

‘’We are confident that he will do a good job as his presence and expertise will really impact on the quality of officiating’’ the CSO Promoter assured.

Another interesting aspect of the current game, Usoh stated is the use of ‘’all glass court’’ with an enlarged gallery to accommodate more fans.

He thanked the Lagos State Government through her Sports Commission and other organizations for their support.

Speaking further at the Conference room of Teslim Balogun Stadium Surulere, the venue of the Championship, CSO boss declared the game was not a ‘’jamboree’’ and reiterated that its objective was to contribute ‘’immensely to the development of Squash at the grassroots and provide a robust platform that will birth and nurture a new generation of Squash players who will proudly hoist the country’s flag on the international sporting arena’’.

He also explained that the discrepancy in the number of foreign and local players was not the discretion of CSO, rather, the PSA, who he said ranks and determines players who participate.

Similarly, Usoh while responding to projections for the CSO in the next one decade said its (CSO) management has before it, a bigger picture and it was against this background it has initiated partnership drives with the many local and foreign stakeholders, so as to ensure sustainability of the Championship in Nigeria.

The qualifying rounds of the tournament is to hold between Monday, May 7 to Tuesday, May 8, 2018, while the draw matches will commence on the opening ceremony – the following day.

Similarly, a statistician Yemisi Olatunji defeated Udeme James (3-0); 11/7; 11/6; 11/9 (50 minutes) to be declared the first female winner in the maiden edition of the Championship which held late August, 2017.