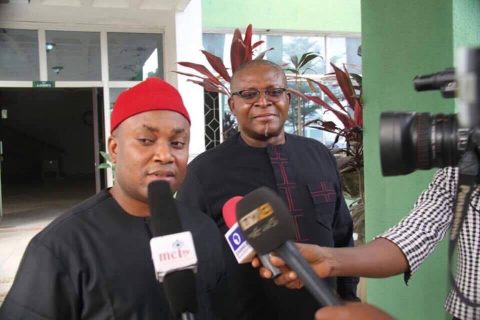 ABIA, NIGERIA (AFRICAN EXAMINER) – The immediate past Speaker of Abia State House of Assembly Mr. Kennedy Njoku resigned due to reservation of the State Governor, Okezie Ikpeazu to his election.

AFRICAN EXAMINER gathered from a source close to the Abia House of Assembly that Njoku’s resignation might not be unconnected to the Governor’s cold disposition to Njoku’s emergence and his percieved opposition to the entire development.

Drama ensued in the Assembly on Friday, as Njoku resigned his appointment, less than 24 hours after he was elected by 20 out of 24 members of the legislative chamber.

Njoku was elected on Thursday afternoon following the impeachment of Chief Martins Azubuike over alleged gross financial misconduct and autocratic style of leadership leveled against him by his colleagues.

But in a dramatic twist, Njoku announced his resignation at the resumption of plenary at about 2.50 p.m. Friday, without giving any reason.

Rather, he thanked his colleagues for the confidence they reposed in him by electing him the number one State’s lawmaker.

Njoku, promised the people of his Osisioma-Ngwa State Constituency of his resolve to
continue to provide them effective representation.

Members of the House, including the Deputy Speaker Dr. Cosmos Ndukwe who presided over the plenary session, described Njoku’s resignation as “shocking and unbelievable”

Following the development, Clerk of the House, Mr John-Pedro Irokansi, immediately called for an election to be conducted to fill the vacuum created by Njoku’s exit.

Thereafter, Kalu was elected by consensus and was affirmed with a voice vote by the 24 members of the assembly.

The new Speaker is a lawyer by profession and the tenth first lawmaker of the State House of Assembly.