Another Nigerian Crashes out at World Taekwondo Championships 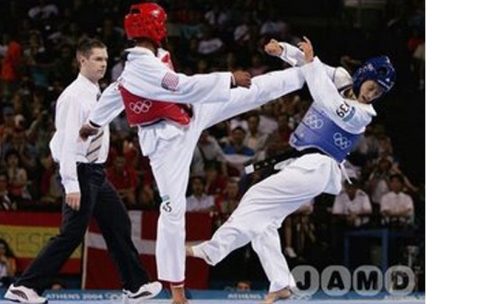 (AFRICAN EXAMINER) – Santos Akhilele lost to his Guatemalan opponent on Monday to join two other Nigerians on the sidelines of the 2017 World Taekwondo Championships (WTC) holding in Muju, South Korea.

Fighting in the men’s -68 kg category of the championships, Akhilele lost 14-16 to Andres Zelaya of Guatemala in a Round of 64 bout.

Earlier in the day, in a round of 128 bout, Akhilele had beaten Phouthasone Thammavong of Lao People’s Democratic Republic 22-11 to give his team hopes.

But he failed to advance after he could not withstand Zelaya’s onslaught in a fight which was very close.

His loss dimmed the Nigerian team’s chances of winning medals following two earlier losses by two of their athletes.

On Sunday, in the men’s -74 kg category, Segun Olushola was disqualified against Kairat Sarymsakov of Kazakhstan in a Round of 64 fight.

Also, the Nigerian team had on Saturday seen Josephine Esuku crashing out, after losing 6-15 to Safiye Polat of Azerbaijan in the women’s -46 kg category.

The Nigerian athletes will return to the mat on Tuesday when Chinazum Nwosu takes on Mary Maina of Kenya.

Also, Isah Adamu will face Tyler Miyagishima of the U.S. in the men’s -58kg round of 64.

Uzoamaka Otuadinma will complete the Nigerian team’s line-up of battles when she faces Carlote Munave of Swaziland in the women’s +73 category round of 64.

The championships will end on Friday