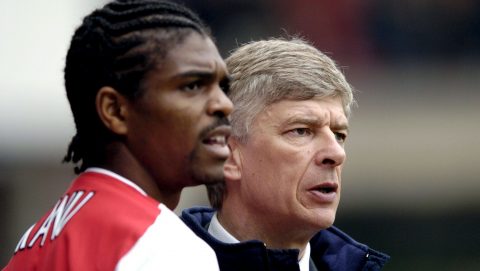 The match is between the Gunners and Burnley and it is scheduled for Sunday, May 6, 2018.

According to reports on their website, Arsenal have written to all her former players who have made 100-plus league appearances for the club to grace the game at the Emirates Stadium.

Kanu joined Arsenal from Inter Milan in 1999; made 119 league appearances for the club and recorded 37 goals.

He spent five years at the club before linking up with another Premier League side, West Bromwich Albion.

The former Super Eagles Skipper’s ex colleagues such as Sol Campbell, Thierry Henry, Tony Adams, Bob Wilson, Frank McLintock and other legends have also been listed and are expected at the match.

The Gunners are said to be willing to use the fixture as a key element of their celebrations to commemorate the Frenchman’s 22 years in charge.

Wenger about two weeks ago announced his planned quit Arsenal at the end of the current season.

In his over decades in charge, Wenger won three Premier League titles and seven FA Cups.