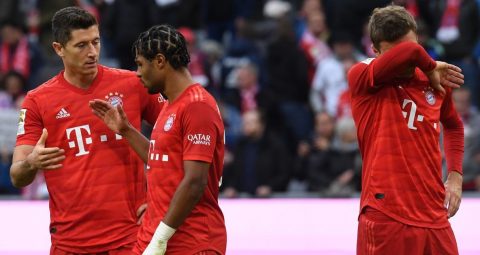 (AFRICAN EXAMINER) – Quadruple winners Bayern Munich slumped to a shock 4-1 loss at Hoffenheim in the Bundesliga on Sunday to end their 32-match unbeaten run in all competitions stretching back to last year.

Bayern Munich, winners of the UEFA Super Cup against Sevilla after extra time on Thursday, had not lost since Dec. 7, 2019.

They had gone 21 consecutive Bundesliga matches without defeat, winning their last 15.

Ermin Bicackcic put them ahead in the 16th minute and Manus Dabbur doubled the lead.

Joshua Kimmich cut the deficit with a superbly curled shot into the top corner in the 36th minute and Bayern Munich missed several good chances to level early in the second half.

But Andrej Kramaric, who had earlier hit the post, killed off their hopes in the 77th minute.

He controlled a cross with his back to the goal and turned beautifully to beat goalkeeper Manuel Neuer.