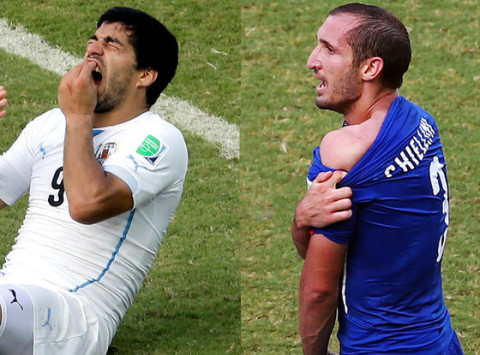 Sympathy for biting footballer Luis Suarez has been in short supply, but Friday the Uruguayan found support from an unlikely candidate — his latest victim.

Bitten on the shoulder by Suarez during Tuesday’s match against Uruguay, Italy defender Giorgio Chiellini labelled the four-month ban handed down to Suarez by football’s global governing body FIFA as “excessive.” 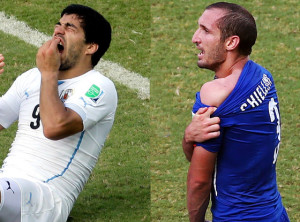 “Now inside me there’s no feelings of joy, revenge or anger against Suarez for an incident that happened on the pitch and that’s done,” Chiellini told his personal webiste.

“There only remains the anger and the disappointment about the match,” added the Juventus defender, referring to Italy’s exit from the World Cup after Uruguay’s 1-0 win.

But FIFA general secretary Jerome Valcke stood by the punishment handed out by the world governing body and told reporters that Suarez should seek professional help after his latest biting incident.

“I think he should find a way to stop doing it,” said Valcke. “He should go through a treatment. It is definitely wrong.”

Suarez has returned to a hero’s welcome in the Uruguayan capital of Montevideo while his countrymen prepare to play Colombia in the round of 16 on Saturday in Rio de Janeiro.

The Liverpool star’s punishment, which also includes a nine-match international ban, prohibits him from football-related activities, meaning he will be prevented from training with his teammates until late October.

“I sincerely hope that he will be allowed, at least, to stay close to his teammates during the games because such a ban is really alienating for a player,” added Chiellini.

“At the moment my only thought is for Luis and his family, because they will face a very difficult period.”

The president of the Uruguayan Football Association confirmed it will appeal against Suarez’s ban as one of his personal sponsors announced it was terminating its contract with the player.

“888poker signed Luis Suarez following a fantastic season for which his achievements were widely recognized,” said gambling website 888poker.com in a statement.

“Regrettably, following his actions during Uruguay’s World Cup match against Italy on Tuesday, 888poker has decided to terminate its relationship with Luis Suarez with immediate effect.”

The bite on Chiellini is the third such offense of Suarez’s career.

When playing with Dutch club Ajax in 2007 he was suspended for seven games for biting an opponent, while he was hit with a 10-match sanction for an identical offense while playing for Liverpool in April 2013.

Suarez also courted controversy in 2011, when he was handed an eight-match ban for racially abusing Manchester United’s Patrice Evra.

Following previous indiscretions, Suarez has enjoyed the backing of his club Liverpool.

According to Spanish radio network Cadena COPE, Suarez’s lawyer will meet with representatives of the English Premier League team in Barcelona.

Suarez has been heavily linked with a move away from Liverpool and, with the 27-year-old set to miss the first nine games of the Premier League season, it remains to be seen whether the Anfield team will continue to stand by its man.

Argentina great Diego Maradona has also come out in support of Suárez, likening the ban to being “handcuffed” and “thrown in Guantanamo.”