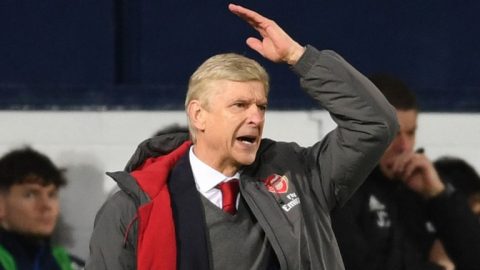 (AFRICAN EXAMINER) – Arsene Wenger crashed out of the FA Cup in the third round for the first time in his long Arsenal career and the worst of it was his view was perfect.

Wenger sat in the stands and suffered as his second-string team conceded four against Nottingham Forest, a team without a permanent manager and wallowing in the depth of the Championship.

No-one has ever won the world’s oldest competition more than the Arsenal manager who lifted it for the seventh time in May.

Eric Lichaj fired Forest into the lead and scored his second to restore the one-goal advantage after an equaliser by Per Mertesacker.

Lichaj had scored four in his previous 181 appearances but suddenly had two inside 24 first-half minutes.

Forest scored two penalties, after the break, the first from Ben Brereton and the second from Kieran Dowell, which was disputed by Arsenal players, who claimed he had slipped and kicked the ball twice.

Referee Jon Moss consulted with an assistant but awarded the goal.

Danny Welbeck had reduced the arrears to 3-2 after a mistake by Forest goalkeeper Jordan Smith, but there was no way back after the second spot-kick despite a dramatic closing period.

Forest centre-half Joe Worrall was sent-off, a straight red for a tackle on Chuba Akpom, but the Championship team hung on, and caretaker manager Gary Brazil was rewarded for his positive approach against a weakened Arsenal team.