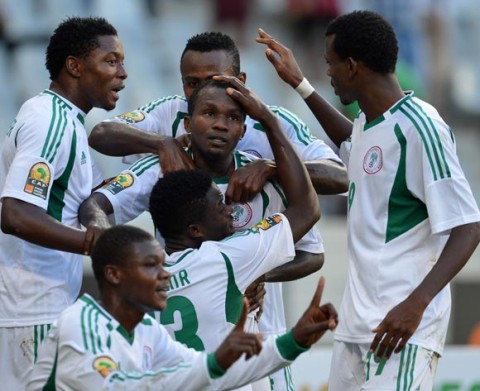 Nigeria has once again made history in African football as the Super Eagles staged the greatest come in the African Cup of Nations Championship after the team came back from three goals down at half to beat Morocco 4-3 in extra-time. 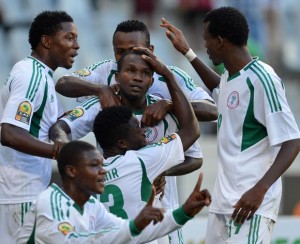 Super Eagles of Nigeria Celebrate one of their goals against Morocco

Soccer fans inside the Cape Town Stadium on Saturday would imagine that the encounter was over after the Atlas Lions scored two goals inside four minutes and added the third 7 minutes later.

Morocco took the lead in the 33 minutes through Mohsine Moutaouali, who beautifully chipped the ball over Nigeria goalkeeper after receiving a lovely pass from midfield.

With three goals inside ten minutes, the game looked beyond the Super Eagles and Moroccan fans were already celebrating victory over their Nigerian counterparts as the centre referee signaled for the break

However, as It would be expected by Nigerian fans inside the Cape Town Stadium, the Stephen Keshi tutored boys looked more energised and determined in the second half.

Their efforts paid off as the Nigerians pulled a goal back early in the second half through Ugonna Uzochukwu.

Inspirational midfielder Rabiu Ali gave the Super Eagles hope just ten minutes after the first goal, when he reduced the deficit in the 56th minutes with a shot taken from outside the box.

Nigeria took control of the game after the second goal and pilled more pressure on their Moroccan counterparts as the Eagles constantly bombarded their opponents’ defense from time-to-time.

However, the team had to wait till the 90th minutes to rip the fruit of their labour, with tournament revelation and arguably Nigeria’s best player in South Africa, Ejike Uzoenyi’s cracking shot, which sent the match to extra time.

Not relenting in their efforts to ensure victory, the Nigearian team scored their fourth goal through substitute Aliu Ibrahim, who jabbed in the winner after goalkeeper Lamyarghri, in goal for Morocco spilled a shot taken by Ejike Uzoenyi with 9 minutes to the end of the sensational encounter.

Super Eagles coach, Stephen Keshi, who has consistently expressed confidence in the team made up of mainly domestic league players was immediately mobbed by members of his technical crew in jubilation.

The former Super Eagles captain had suspended his 52nd birthday celebration two days ago, saying ” until we accomplish our goal here.”