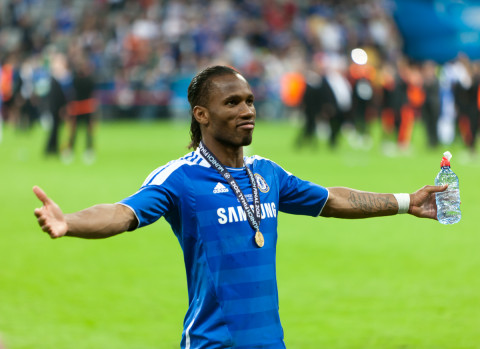 Pellegrini is on the look out for a new striker after losing Alvaro Negredo to a broken foot, and it is understood Pellegrini could turn to veteran star Drogba as he looks to lure a top class goalscorer to the Etihad Stadium.

Spanish star Negredo has broken his metatarsal and will be sidelined for up to four months, leaving Pellegrini short on attacking options as his champions get set to defend their Premier League title.

The Chilean is understood to have a number of options on the table and will make a decision on his future this week.

But Pellegrini believes the 36-year-old could be a viable option on a 12-month contract to improve his striking options now Negredo is sidelined.

Drogba has the chance to land a lucrative short-term deal with the reigning champions, and if tempted,  the Ivory Coast hitman could reject Chelsea’s offer and go to Manchester instead.

Negredo, meanwhile, will miss the start of the new season and must spend the next few weeks with his foot in a protective boot.

The former Sevilla hitman suffered the injury in a friendly against Hearts on Friday and was left stuck at home yesterday as Pellegrini’s men flew to Kansas to start their pre-season tour.

Negredo’s future at the Etihad now looks even more bleak after being struck down.

It is understood Pellegrini was willing to listen to offers for the 28-year-old despite Negredo vowing to fight for his place at the champions.

But Pellegrini will not be able to sell Negredo until the January transfer window at the earliest.