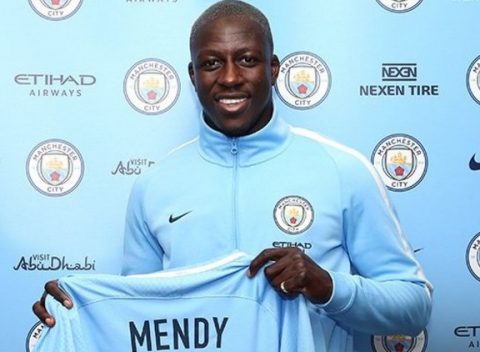 BALTIMORE, MD (AFRICAN EXAMINER) – Having completed his transfer from Monaco to Manchester City for £52m, Benjamin Mendy is now the world’s most expensive defender.

Mendy signed a five-year deal with the City.

The 23-year-old France left-back has is City’s fifth major signing of the summer and jerked up their spending to over £200m.

Manchester City Director of Football Txiki Begiristain admitted Mendy ”is undoubtedly one of the world’s best full-backs, our number one target in this position”.

The defender played 34 times for Monaco last season and helped them to their first Ligue 1 title in 17 years after joining them from Marseille last summer.

He is the Premier League club’s fifth major signing of the summer following the recruitment of England right-back Kyle Walker  for £45m, plus a potential £5m of add-ons.

It would be recalled that the City have sold their left-back Aleksandar Kolarov to Roma for £4.5m.