Despite Everton Relegation Threat, Koeman Says It’s Not too Late 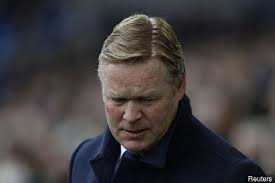 (AFRICAN EXAMINER) – Despite their relegation in the Premier League, Manager Ronald Koeman has boasted he can turn Everton’s fortunes around.

The club suffered a 5-2 defeat by Arsenal at Goodison Park.

Everton were embarrassed in front of their fans, and have not won in five games in all competitions.

While reacting, Koeman said the “rumours” about his position are “normal”.

“The team is under performing. It is in a difficult situation mentally.

“That is what we need to change. I still believe I can change the whole situation but everybody knows how it works in football. That is all I answer about this situation so ask somebody else.

“It is how you look to the situation. If you start to think negative then maybe there is no solution. I am not like that” the Dutchman said.

With only two league wins this season, Everton were given early hope when Wayne Rooney re-enacted his famous goal against Arsenal from 2002 as a 16-year-old with a brilliant 20-yard curling finish past Petr Cech.