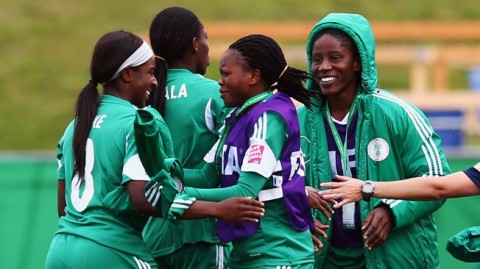 USA based Courtney Dike scored the fastest goal in the history of FIFA women’s tournaments after she took advantage of Korea Republic’s lacklustre defending. 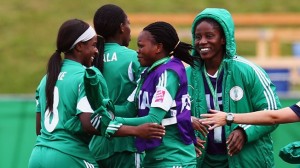 Dike, who was starting her first match of the tournament after coming on as substitute in the opener against Mexico, set the tone for the Super Falconets, who were eager to jump to the top of Group C after England and Mexico had shared the spoils earlier in the day in a 1-1 draw.

Nigeria continued to threaten Korea Republic’s goal when Osarenoma Igbinovia had a shot from distance tipped over the bar by Min Yukyeong. Nigeria had another opportunity in 17th minute when Asisat Oshoala’s cross found Loveth Ayila, who was unmarked in the penalty area. However, her shot hit a defender and spun just wide.

Korea Republic had their first chance of the first half in the 24th minute when Kim Soyi’s attempted chip over Nigeria goalkeeper Sandra Chiichii went over the bar. Soyi and her team would regret that missed opportunity as Nigeria took a two-goal lead ten minutes later through Chinwendu Ihezuo. Ugo Njoku’s cross from the right wing found Ihezuo, who controlled the ball before firing a powerful shot past Minyeong.

Nigeria picked up from where they started by controlling the opening stages of the second half, although Korea Republic were able to ask questions of the Super Falconets’ defense as the half progressed.

The best chance for the South Koreans came in the 59th minute when Kim Inji received the ball and shot from the left side of the penalty area only to watch her effort go inches wide of the near post. Inji would have see another effort suffer the same fate ten minutes later as the Nigerians continued to breathe a collective sigh of relief.

A nervy conclusion was guaranteed in the 71st minute when Nigeria failed to clear their lines effectively and Soyi capitalised by scoring from the edge of the penalty area to give the Koreans a lifeline. But while the Asian champions often threatened an equaliser, Nigeria’s defense held on to claim the first win of the group in Moncton.