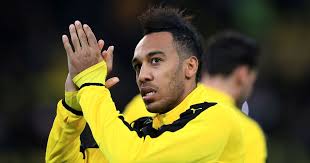 (AFRICAN EXAMINER) – Arsenal have signed Gabon striker and the 2015 African Footballer of the Year Pierre-Emerick Aubameyang from Borussia Dortmund for a club record £56m.

The English club had two bids for the 28-year-old rejected by Dortmund before agreeing to a fee that eclipses their £46.5m for Alexandre Lacazette in July.

Dortmund finally agreed to the sale after striking a deal to sign Chelsea forward Michy Batshuayi on loan.  The Club confirmed that the former African Football champion joined the club on “a long-term contract”.

On his own, Aubameyang said: “I’m really happy to be here in this great team.”The club has such a big history and great players like Thierry Henry. He’s an example for us strikers. I’m a fast player and I score goals too, like Henry a little bit. I think I have to work a lot to be like him, but I will do.

“I hope that we will come back to the top as soon as possible. I will do my best to join in.”

However he was suspended by the German club for their match against Wolfsburg on January 14 for missing a team meeting.

In addition to his suspension, Aubameyang was left out of the squad for their next game game at Hertha Berlin because club officials felt he was not focused enough, but he played 90 minutes in Sunday’s 2-2 draw with Freiburg.

It would be recalled that the striker joined Dortmund from French club Saint-Etienne in 2013.