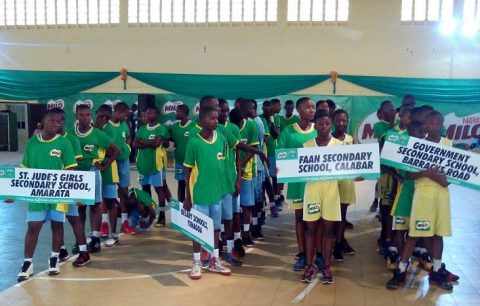 (AFRICAN EXAMINER) – Ebonyi and Bayelsa states have emerged winners  of the 19th edition of the Equatorial Conference of the 2017 secondary school Milo Basketball Championship.

Speaking at the event which took place at the Indoor sports Hall of the Nnandi Azikiwe stadium  Enugu, the Commissioner for Youth and Sports in the state,  Charles Ndukwe,  commended Nestle Nigeria Plc, sponsors of the Milo Basketball Championship, for their commitment towards the development of grassroots sports in Nigeria.

Also in attendance was the Chairman of Enugu State Post Primary Schools Management Board (PPSMB), Barr. Nestor Ezeme, who also hailed Nestle Milo for the consistent effort in the development of basketball in the country .

Coach of the winning Ebonyi team, who also doubles as the school’s principal, Rev. Fr. Ofuluozor, beamed with excitement as his team look forward to a worthwhile National Finals, which will be holding from 11th to 17th June 2017 at the Indoor Sports Hall of the National Stadium in Lagos.

Rev. Fr. Ofuluozor,  who is also a basketball player, said the annual Milo Basketball Championship has helped the students  to be  focus during training, adding  “I have to commend Milo for helping basketball teams in Nigeria to develop.

“The competition has helped my school in the development of basketball teams. Without the competition, maybe we would not have been this focused,” he said.

While St. Augustine’s Seminary, Ebonyi, produced the Most Valuable Player (MVP) in the male category,  it would equally  be recalled that the school won the State Finals in 2005, the regional finals six times since 2010 before winning the 2017 edition,.

Sponsorship  of the event over the years, according to  Nestle PLC, is part of the company’s corporate social responsibility towards the development of sports in Nigeria and elsewhere.